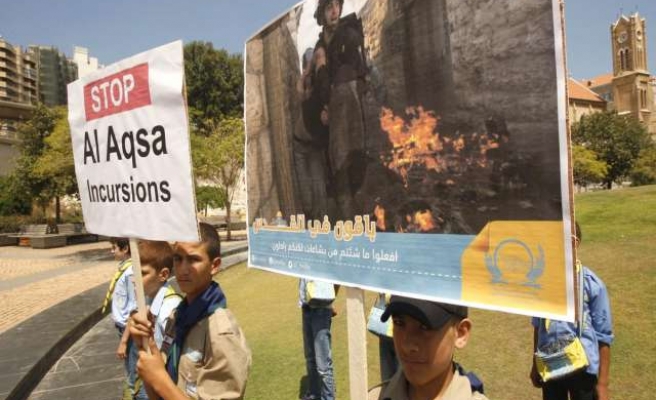 The protests mark the 47th anniversary of the Six-Day War, which Arabs refer to as the "Naksa" ("Setback"), during which Israel captured East Jerusalem and the Gaza Strip.

Global mass rallies in support of the occupied city of Quds and Al-Aqsa Mosque are taking place in more than 80 cities in 42 countries around the world.

According to the Middle East Monitor, huge marches are to kick off in the West Bank and the occupied territories of 1948, heading towards Jerusalem or to the nearest point to it, in addition to the rallies taking place in the surrounding countries, in several Arab countries, as well as in Turkey, Indonesia, Malaysia, 10 European countries, Latin America and in countries where there are Israeli embassies.

The Jerusalem International Foundation has urged Arabs, Muslims and the international community to participate in the rallies.

In a Saturday statement on the occasion of the 47th anniversary of al-Quds occupation, Hanna renewed his total rejection of the Tel Aviv regime’s Judaization schemes and other racist practices in the occupied al-Quds and Palestine.

“We renew our total rejection to Israeli occupation”, said the high ranking Christian cleric. “We, Muslims and Christians, remain united in defending occupied Jerusalem despite Israeli violations and pressures.”

“On the anniversary of Nakba (setback), we will remain united for the sake of freedom, dignity, and independence,” Hanna added.

Demonstrators in the Lebanese capital of Beirut marked on Saturday the annual event, which is dubbed “Global March to al-Quds.”

The march is aimed at expressing solidarity with the Palestinian people who continue to fall victim to the Israeli aggression.

The Arab-Israeli war on June 5-10, 1948, known also as the Six Day War, was fought between Israel and neighboring Arab states Egypt, Jordan and Syria. The war resulted in a decisive Israeli victory and changed the Middle Eastern political landscape, as Israel expanded its territory by capturing the Gaza Strip and Sinai Peninsula from Egypt, the West Bank and East Jerusalem from Jordan, and the Golan Heights from Syria.