Following the distribution of hot meals, a stampede was experienced while alms-charity was distributed. During the stampede, many women fell to the ground with their children on their back. 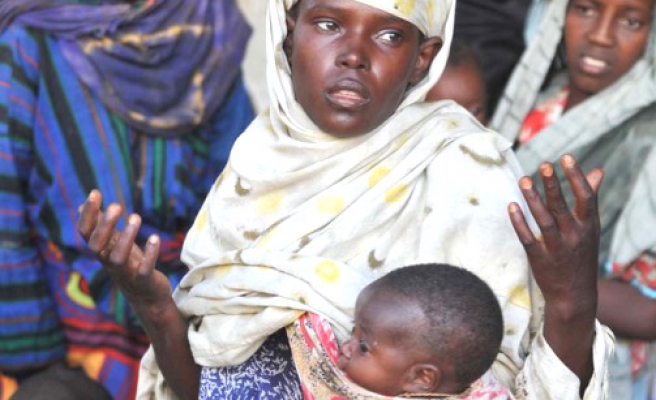 Aid materials sent from Turkey to the people living in camps in Somali capital of Mogadishu are being distributed with prayers for rain and benediction.

The Holvudak camp, full of people who had to leave their villages and towns due to drought, has received aid for the first time. Prior to the distribution of hot meals, the Chairman of Somali Directorate General of Religious Affairs Sheikh Ahmad Mahmoud and a theologian-author from Turkey, Ecir Esiyok, made prayers for rain and benediction.

While the prayers were made, women and children said "amen" and requested rain and benediction. Following the prayer, children and women at the camp received their meals in dishes or plastic bags.

Following the distribution of hot meals, a stampede was experienced while alms-charity was distributed. During the stampede, many women fell to the ground with their children on their back.

Chairman of the Nile Organization and Somali representative of the Kimse Yok Mu Charity Association, Bilal Celik, said that the people living in camps could go back to their villages if the villages receive rainfall.

"We request everything from the source of all richness, God. People living here in camps may see the individuals distributing food as the source of the aid. Yet this is not the case. God is using us as a means to distribute aid. All food comes from God. We remind them all that they should be grateful to God," Celik said.

"The only solution for these people in the long term is to receive rainfall. Rainfall is possible only by God. We believe that the prayers of individuals suffering from drought would be accepted and as such we organized a prayer with local religious figures and friends from Turkey. With God's will, we will receive rainfall and these individuals would be able to return to their villages," Celik noted.

Kimse Yok Mu Association has so far distributed 9,500 boxes of food items and it plans to erect a tent city with 2,000 tents.

21 volunteer doctors as part of the association will conduct health screenings and make treatments.

Many kids also joined in the line of people receiving meals. One of the kids was Mahmoud who lost his mom and dad while he was a baby.

"Currently, I live with my aunt. We used to live about 30 kilometers away from here," Mahmoud said.

Another kid Salim said that he heard those distributing food items were Turks.

"We love the Turks," Salim said.

However, not every child at the camp was lucky as much as Mahmoud and Salim.

Mother Nuray Nur said that Naime was very ill for the past 10 days and she was lying still all the time in their tent.

"I have five other kids. I have no money or medicines. I do not have the financial ability to take Naime to the hospital," Nuray Nur said.

"Mogadishu getting ready for Turkish PM"

Meanwhile, preparations are underway in Mogadishu for Turkish Prime Minister Recep Tayyip Erdogan who will visit the city on Friday.

Tight security measures are being taken in Mogadishu, and buildings of the Somali Presidency are being restored.

Banners with pictures of Erdogan and the Somali President Sheikh Sharif Sheikh Ahmed side by side have been placed in downtown Mogadishu.

One of the banners reads "We are grateful to you (Turkey) for not forgetting us on this day".