Ramadan chance for Muslims to be recognized in Brazil

Muslim communities in Brazil began establishing foundations centered around the mosques in the country 17 years ago. 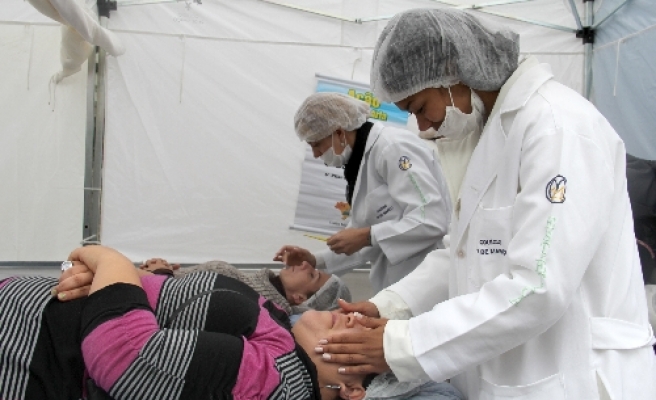 Sao Paulo, where Muslims make up only a small percentage of the city's population of 20 million, is no İstanbul, which undergoes something that one can call "Ramadanization" during the Muslim holy month with iftar (fast-breaking) events and mahya illuminations at mosques, to name a few traditions.

Since there is only a small group of Muslims in the city, they are even more conscious of Ramadan than those living in predominantly Muslim countries. They gather under one roof for the occasion of Ramadan and work harder to seize the spirit of Ramadan and do good deeds. Muslims exert great efforts to be seen in Sao Paulo, especially during this holy month.

Muslim communities in Brazil began establishing foundations centered around the mosques in the country 17 years ago. These foundations currently hold joint activities under the roof of an organization called the Union of Islamic Institutions, which carries out activities to highlight the Islamic principle of helping those in need.

This year's Ramadan has seen Muslim communities come together to organize health programs that were conducted in the poorer regions of Brazil. Roughly 200 doctors -- a few of them Muslims -- volunteered in one such program I attended.

Jamel Ali el Bacha from the Union of Islamic Institutions, himself a doctor, said each weekend around 15,000 people living in the shanty towns of Sao Paolo were able to receive a health checkup from a doctor.

A 78-year-old woman living in one of the shanty towns, who had her cholesterol levels checked, said this was the first time she had seen such a service.

Organizers planned this voluntary service down to the smallest detail. Fully equipped open-air hospitals were set up for one day in which children were taken care of, given candy and areas to play in free of charge.

One of the doctors volunteering in the program said after he took part in the project that he had discovered Islam was not a "terrorist" religion. "I have begun to see its beauty," he added.

A poster providing information on Islam was hung in each tent built as part of the open-air hospitals, with one tent having been set up especially for people who are curious about the religion. Books on Islam's view on Jesus in Portuguese were also available to visitors. Everything takes place with maximum care and with love and not a single sign of insincerity can be seen.

Iftar meals were also organized by Muslim communities at mosques in Sao Paulo, where some hosted iftars every night and some only during the week.

Visiting the mosque, eating iftar and performing prayers are exclusive activities for Muslim families in the city during Ramadan. Since it is hard to find food that can be eaten by Muslims in Sao Paolo, iftars in mosques offer a good opportunity for those looking for a good place to break their fast.