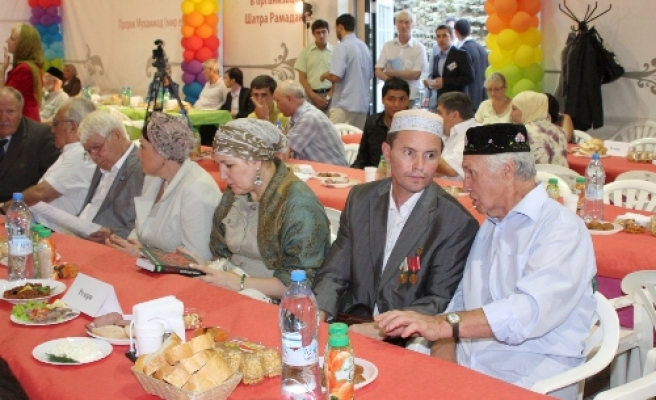 A Ramadan tent set up in the Russian capital of Moscow offers iftar dinners and festive Ramadan activities for locals and Muslims who live in the city.

The tent is located in a park that features the houses of worship of the three Abrahamic religions -- a mosque, a church and a synagogue. Every night, more than 500 people share the same iftar (fast-breaking dinner) table during Ramadan. The tent hosted the first iftar on Monday under the auspices of the Moscow municipality. The dinners are held by the Russian Mufti Council. Cultural activities, including those which feature traditional Turkish and Tatar arts, will take place at the tent until the end of Ramadan.

The first iftar started after Necmi Dünya, who serves as an imam in Moscow during Ramadan, recited the azan (call to prayer). The menu for the night comprised lamb stew, lentil soup, rice, salad and other delicacies as well as çakçak, a traditional Tatar dessert. The guests who attended the iftar delivered messages of peace and tolerance.

Among the guests were the Chairman of the Russian Mufti Council Ravil Gaynuddin and officials from the Moscow municipality. Spiritual leaders of Russia's Christian and Jewish communities and representatives of Russian civil society organizations were also in attendance

In his speech, Gaynuddin said the tent set up in Moscow is taken as a model in the Far East, Siberia, Ural and Volga River regions. Greeting the guests on behalf of Moscow Mayor Sergey Sobyanin, Yuri Artyuh, an official from the municipality, said they attach great importance to the Ramadan tent in Moscow. While stating that such events contribute to interreligious dialogue and friendship between communities and to peace in Moscow, a multicultural and multinational city, Artyuh added, "We will continue holding such events together."

Sergey Ryahovski, head of the Associated Russian Union of Christians of Evangelical-Pentecostal Faith (ROSKHVE), noted that all religions call upon people to do good deeds, saying: "I agree with the verses that I read in the Quran in the Bible. Fasting enriches us. Family is important in Christianity as well, and we are asked to abstain from alcohol.

"When I entered a mosque in Chechnya, I fell to my knees and started to pray. The Muslim youths were surprised. They experienced culture shock. I prayed in the same row as our Muslim brothers. I believe I will pray with you again at the opening of the new Moscow Central Mosque," Ryahovski added.

In an interview with the Cihan news agency, Mufti Gaynuddin said Turkish institutions contributed to the opening of the iftar tent in Russia. "We [the Russian Mufti Council] thank the Turkish Republic on behalf of all Russian Muslims. As we break our fast, we won't forget you, our brothers and sisters."

"We pray for the political, economic and cultural relationship between Russia and Turkey to further improve. We send our greetings and love to our Turkish friends from here. May God be with you," Gaynuddin concluded.

Roman Bagdasarov, who represented the Russian Orthodox Church at the iftar, said Ramadan made him very enthusiastic and he praised the initiative of an iftar tent during Ramadan. "It is a magnificent event. We all feel that by gathering here we are the children of this world and that a lot of responsibility rests upon our shoulders. If there is a more positive dialogue and cooperation between the faiths in Moscow, we can solve all kinds of problems together. Initiatives such as putting up Ramadan tents are the best examples to this end," he said

Zinovy Kogan from the Russian Jewish Congress said it was his sixth time in a Moscow Ramadan tent and that every time he witnesses a bigger attendance. "I hope the construction of the Moscow Central Mosque will be completed soon so that I may attend the opening. My brother Gaynuddin told me that he would invite me. It will be a happy occasion to all meet there. I also want to send my love and greetings to our Turkish Muslim friends," he said.

The iftar tent established in Moscow is hosting more than 500 people every night this year. The number of people in attendance has gotten bigger with every year.

Deputy chairman of the Russian Mufti Council, Mustafa Kütüküçü, said the social solidarity and religious education department of the organization visits prisons, orphanages and retirement homes and presents gifts. Noting that Ramadan is celebrated with more enthusiasm this year, Kütükçü said the Muslim population of Russia of over 20 million people contributes to peace in Russia.

One of the guests at the opening night, Tatarian Gulnura Gaziyeva, said she was happy to have an iftar meal with other believers. "Muslims of Moscow display friendship at the tent, not only iftars but the beautiful Islamic tradition [of sharing at iftars] that we promote here," she said.

Russian Artyom Dotsenko was also among the guests at the tent. Describing the iftar as a "beautiful experience," he said he was happy to have participated in such an event. "I will tell my friends about Ramadan iftars. I believe this tent will attract more and more people every year."

The Ramadan tent is scheduled to celebrate a Turkey Day on Aug. 21, an advisor of religious services at the Turkish Embassy in Moscow, Fahri Sağlık, told the Cihan news agency. He called upon all Turkish residents of Moscow to join them at the tent that day. "We have a Ramadan partially like in Turkey. Families visit each other for iftar," he said.