The fact-finding team said there was a recent history of alienation between Hindus and Muslims, stoked largely by propaganda put out by local Hindu media outfits. 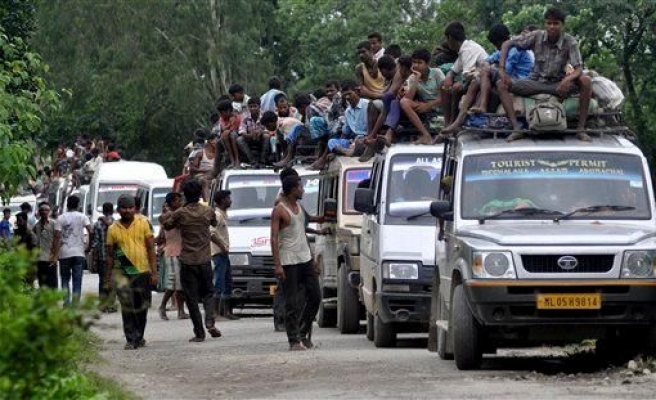 A six-member fact-finding team from a New Delhi research center has cited attempts to "cleanse" Muslims from some Hindu-majority villages in the north-central Uttar Pradesh (UP) province, accusing the state government of failure to halt the violence, if not downright complicity.

"Muslims were attacked not so much with the intent of causing death… but with the object of chasing them out of the Hindu-majority villages," the team concluded in a report issued Tuesday.

The report went on to point to "a plan to end decades of coexistence and 'cleanse' certain villages of their Muslim presence."

Recent Hindu-Muslim clashes in Muzaffarnagar, located in the western part of the UP province, have left 47 dead.

They also forced some 40,000 people to flee their villages, according to the state government.

The crisis began in the village of Kawal, when a Muslim man was killed by the brother and cousin of a Hindu girl after allegedly harassing her.

The two killers, members of the Hindu Jat community, were reportedly lynched by the family of the slain Muslim and others in the locality.

"[This] was a localized incident that could have been contained by a strong dose of political statesmanship," concluded the fact-finding team from the Center for Policy Analysis (CPA), which visited the area on September 14.

It recommended that a Supreme Court judge be appointed to lead investigations into the violence.

The fact-finding team said there was a recent history of alienation between Hindus and Muslims, stoked largely by propaganda put out by local Hindu media outfits.

The team cited "a deliberate disregard for rising tensions and intelligence reports." It went on to blame the state government for acting "in the worst possible manner" and failing to arrest those who used hate speech.

"Instead of stepping up with what was required, the UP state government signaled indecision, ineptitude or even worse – possibly a degree of collusion with the forces of disorder," the team concluded.

"The evidence seems to indicate overwhelmingly that the administration remained passive as the spiral of provocative actions gathered momentum," the report added.

The team cited "conflicting guidance from the political leadership," underlining the need to "uncover" the trail of formal instructions and informal verbal orders given by political leaders during the two weeks that followed the Kawal incident.

"Muzaffarnagar, and indeed the western belt of UP, was plagued by toxic rumors designed to pit communities against each other," it said.

"Instead of defusing these from the very beginning through a sustained information campaign, the state government chose to ignore them, contributing to a volatile atmosphere that could have erupted at any time," the fact-finding team added.

The team also faulted the role of the state's ruling Samajwadi Party and the opposition Bhartiya Janata Party (BJP).

It traced the growing activities of Hindu organizations, like the BJP-affiliated Vishwa Hindu Parishad, and the curious response of the Samajwadi Party (SP) government.

"The entire thing was seen to be a choreographed spectacle in which the SP and opposition BJP would create a sharp polarization on communal grounds, compelling the electorate in the state to make a choice between them, and squeezing out the other parties," it said.

"The BJP has been actively involved in the violence and could emerge, when the embers die down, as the major gainer," it added.

The fact-finding team also attacked the Congress, which holds the federal government, saying that the party saw the situation as an opportunity to garner votes.

The report was partly corroborated by a sting operation by a local television news channel (Headlines Today) on Tuesday night.

The operation showed state police and administration officials speaking about "pressure from above" in handling the situation.

It showed the sub-divisional magistrate from the administration and the local police officer at Jansath recalling how a local issue – the killing of the Muslim man and the retaliatory lynching of the two Hindus – had become a trigger for violence.

The officers said they had registered a case and detained seven men as prime suspects when orders came from "above" to move the case in an entirely different direction.

The officials specifically named Azam Khan, a cabinet minister usually described as the "Muslim face" of the UP government headed by the SP's Akhilesh Yadav.

Khan, they claimed, had instructed them to go easy on rioters and release those of a particular community who had been arrested for violence.

The suspects were reportedly let off while the names of other individuals were introduced.

One of the officers explained that the riots had probably been the result of a miscalculation by leaders who wanted to create Hindu-Muslim polarization in hopes of garnering more votes.

But the issue blew up and they lost control of the situation.