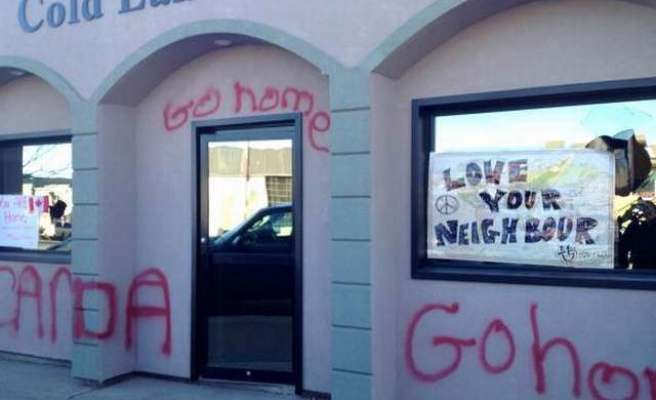 Residents of the small Canadian city of Cold Lake gathered on Friday to scrub away hate messages that had been scrawled in paint on the walls of a mosque and replace them with posters reading "Love your neighbour" and "You are home."

The battle of words playing out on the facade of the Cold Lake Mosque follows two separate deadly attacks on Canadian soldiers this week by converts, including one on Wednesday that spilled into Canada's parliament building.

Cold Lake is home to a Canadian air base that has deployed fighter jets against ISIL militants in Iraq.

The mosque was hit overnight with red spraypainted graffiti reading "Go home" and its windows were smashed. By Friday afternoon, the community volunteers had removed the spray paint, fixed the windows and taped their posters up.

"These guys are peaceful, and I think it's important for the community to show them that we know the difference between extremists and a religion," Cold Lake resident Matt Downy said, bringing a vase of flowers to the mosque.

Imam Syed Soharwardy, founder of Muslims Against Violence in Calgary, told reporters earlier that the vandalism revealed "how fragile the situation can be if it is not properly managed."