Director Görmez helped scoop food from the boilers to the thousands of residents who had come to partake in the meal. 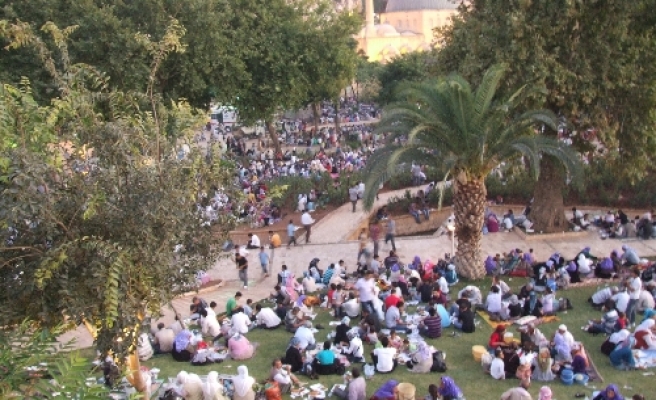 Fifty thousand people came together for a huge iftar in Şanlıurfa to celebrate Laylat al-Qadr (Night of Power), celebrated on the 27th night of the holy Islamic month of Ramadan.
Religious Affairs Directorate President Mehmet Görmez attended the fast-breaking dinner, which was organized by his institution.

The handing out of food started two hours before the sunset prayer on Friday at food distribution points set up at the sacred historic site of Balıklıgöl to Şanlıurfa residents wishing to take their iftar meals home. Hymns were sung and the Quran was recited as the large group of people enjoyed their iftar together.

Director Görmez helped scoop food from the boilers to the thousands of residents who had come to partake in the meal.

Those waiting for vacant space at the iftar tables lounged on the grass and visited tea gardens around Balıklıgöl. The iftar officially began with the call to prayer at sunset.

The iftar menu consisted of rice, roasted meat, cacık (chilled yogurt with chopped cucumbers), dessert and ayran (a salty yogurt beverage). One-and-a-half tons of rice and three tons of meat were used in the preparation of the meal for the evening.

Laylat al-Qadr, which can be translated as the Night of Power, the Night of Decree or the Night of Measures, marks the night on which the Prophet Muhammad received his first revelation from God through the Archangel Gabriel.