Players such as Xherdan Shaqiri and his team mates Valon Behrami, Granit Xhaka, Haris Seferovic and Admir Mehmedi are all Muslims from a Balkan background. 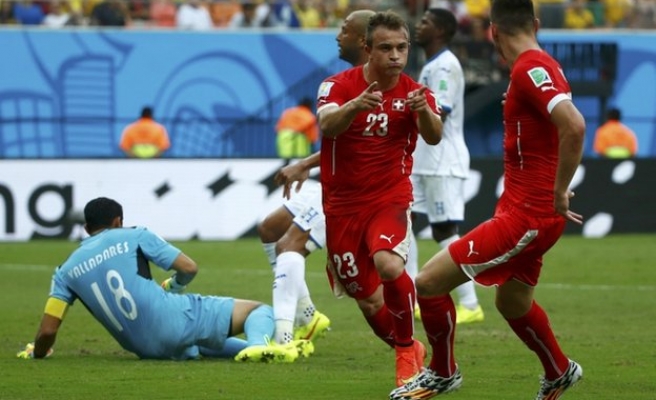 Despite crashing out of the World Cup on Tuesday, Switzerland's national football team is currently ranked sixth in the world. Players such as Xherdan Shaqiri and his team mates Valon Behrami, Granit Xhaka, Haris Seferovic and Admir Mehmedi have made the hearts of the Swiss swell with pride.

Besides the fact that all of these players are very successful of the field, they have another thing in common and that is that they are Muslim in a country which very recently voted to ban minarets.

They are all immigrants or the children of immigrants to Switzerland, where voters in February backed strict new quotas on immigration.

Among the country's total population of eight million, almost two million are not Swiss.

Not many Swiss were able to get use to the diversity their country was attaining which lead them to be unwelcoming to the immigrants.

When Xherdan Shaqiri, Granit Xhaka and Valon Behrami were growing up in Switzerland, a poster from the right-wing Swiss People's Party appeared supporting a campaign against public funding for integration centres for immigrants from Kosovo. It read simply "Kosovo-Albaner Nein", or "Kosovar Albanians No".

The Peoples Party have made campaigns in the last decade against immigration, or against relaxing Switzerland's strict laws on citizenship, have targeted the Balkan community, especially the Kosovar Albanians.

The immigrants were blamed for everything from rising crime, to drug dealing, to speeding offences, and falling educational standards.

Even though many Swiss publicly expressed shame at such open prejudice, the support the party by voting in favour for them.

Studies by the Swiss Federal Commission on Racism showed that young people with Balkan surnames had a far smaller chance of getting a job or an apprenticeship than those with Swiss names.

As a rising star on the Swiss football scene, Xherdan Shaqiri was asked about his origins.

"I'm a Kosovar Albanian," was his answer, firmly identifying himself with a group which he knows very well has been demonised by some sections of Swiss society.

More recently, last December, he was asked how he celebrated Christmas.

"I'm a Muslim," he said with a smile. "So we don't celebrate it so much, but my little sister loves to have a Christmas tree, so we always get one of those."

Granit Xhaka meanwhile told a Swiss newspaper: "We play for Switzerland and we are proud to give our all."

Asked though what music he would be listening to on the bus to the first World Cup match, he answered: "Albanian songs."

All of the players have a citizenship Swiss citizenship and have lived all of nearly all of their lives in Switzerland.

The message is pretty clear: we are here, we are Swiss, we are proud to play for Switzerland, but do not ask us to abandon our culture.