Syrians in Egypt have tasteless Eid

"If I had not have to bring bread to my family, I would have never left my house today," al-Homasi, a Syrian refugee who fled the ongoing deadly conflict in his homeland and sought a safe haven in Egypt said. 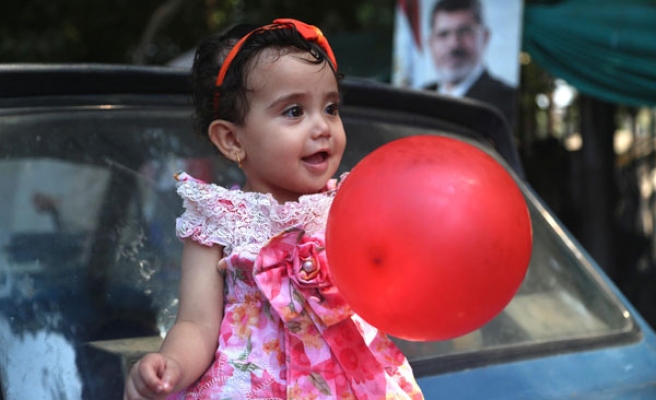 Standing in queue before a local bakery in the Egypt's 6th of October City, Samer al-Homasi, worried and anxious despite the celebratory mood around him, was waiting for his turn to get bread for his family.

For al-Homasi, a usually easy errand like that has become a major source of concern – even if all people around him are celebrating a joyous Eid al-Fitr.

"If I had not have to bring bread to my family, I would have never left my house today," al-Homasi, a Syrian refugee who fled the ongoing deadly conflict in his homeland and sought a safe haven in Egypt, told Anadolu Agency.

Life has not been easy for Syrians in Egypt since the July 3 ouster of President Mohamed Morsi by the military. The UN refugee agency (UNHCR) in Egypt said it has registered, or is in the process of registering, around 90,000 Syrians.

Under Morsi, Egypt's first democratically elected president, Syrians were allowed to enter the country without any visa requirements.

Shortly after Morsi's ouster, however, the authorities began requiring Syrians to obtain paid visas and prior security clearance, while local media fanned public anger against the Syrian community following accusations of taking part in the pro-Morsi rallies.

"Syrians enjoyed free movement before the recent incidents in Egypt," al-Homasi said. "Now most Syrians are forced to lay low in accordance with the local saying 'keep away from evil'."

Last month, the rights group Human Rights Watch (HRW) said Egyptian police had arrested over 81 Syrians, including children, in two days with many of them being threatened to be deported.

"Most Syrians do not have residence permits or have expired ones, and that one of the reasons of the arrests by the Egyptian authorities against Syrians, not to mention detention over political affiliation or other charges," al-Homasi said.

A high-ranking Egyptian security official, who asked to be unnamed, confirmed to AA the recent arrests, saying they are "triggered by specific legal violations, like lack of residence permits, posing a threat to the Egyptian national security or involvement in illegal activities."

The climate of growing hostility drove many Syrians to decide to spend their Eid at home, and those who were courageous enough were advised by their fellow countrymen to keep a low profile.

"This Eid is the worst in terms of movement and the psychological mood for Syrians, and even Egyptians," Abdel-Sattar Attiyah said at a café in 6th of October City where many Syrians live.

"The Syrians have been affected by the political turmoil like the Egyptians, but it has been more difficult because the campaign of accusations and incitement against the Syrians as part of the political disputes in Egypt," added Attiyah, who fled to Egypt two years ago after fighting broke out in his home province of Hama.

Despite all that, a few decided to take the risk and have a glimpse of the Eid spirit in the troubled country. One was Khaled Nuwailati, 40, who took his two children to a nearby amusement park for a fun day.

"When I play with my children, a rush of the memories of past Eids come to my mind as I used to take them to the festival of the Citadel of Damascus during the Eids or to the parks in Damascus before we had to flee the escalating military operations there," Nuwailati said, noting that this is the first Eid ever he celebrates outside the Syrian capital.

"I'm trying to pretend to be happy before my children because children did nothing wrong to feel the agony and bitterness of the grownups who feel worried about their relatives that are still in Syria," he said.

Thousands of Syrians have taken refuge in neighboring countries after President Bashar Al-Assad's regime cracked down on protests demanding an end to his rule in March 2011.

More than 100,000 people have been killed since the conflict began, according to activists.

"We have not heard about many of our family members for a long time, some are arrested, some are missing and some do not have means of communication," he bitterly added.

"Luckily, children do not have to suffer the problems and pains felt by the parents."