At least three Muslim Uyghurs were killed and 20 others injured in clashes in East Turkistan, when security forces opened fire at a crowd trying to stop police from arresting suspects. 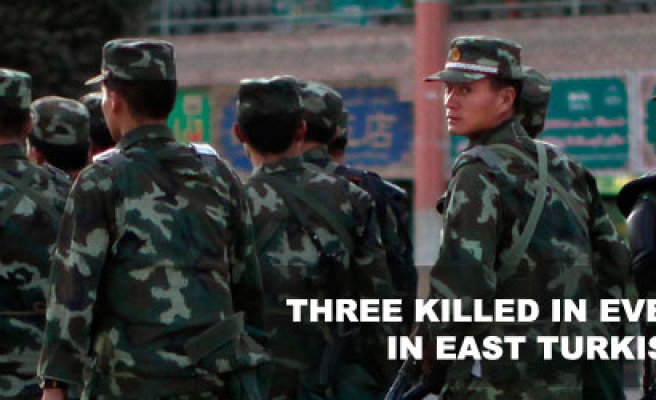 At least three ethnic minority Muslim Uyghurs were killed and 20 others injured in clashes in East Turkistan (Uyghur Autonomous Region), when security forces opened fire at a crowd trying to stop police from arresting suspects outside a mosque on the eve of the Eid al-Fitr festival, reported Radio Free Asia.

The incident occurred on Wednesday night as Uyghurs in the region's Aksu prefecture were preparing for prayers ahead of the Eid marking the end of Islam's holiest month of Ramadan, they said.

Police said they had gone to the Peyshenbe Bazaar Mosque in Aykol town to arrest four Uyghur suspects wanted in connection with illegal religious activities when they came under attack by an angry mob hurling stones and bricks.

As the crowd surrounded a police car and their number swelled to up to 600 people, mostly those who were returning from prayers at the mosque, police brought in reinforcements of about 500 personnel, including a SWAT team, in a bid to restore order, according to a senior town police officer.

"We warned the mob to disperse but they attacked us with stones and bricks," Abdugheni Osman, deputy head of the Aykol police station, told RFA's Uyghur Service. "Just after midnight, we received the order to fire and three were killed on the spot and 12 [civilians] were injured."

He said 10 policemen were also wounded in the clashes.

More than 90 people, including three women, have been arrested for questioning following the incident, Abdugheni Osman said.

Among the dead was a woman who was wearing a veil over her face, he said, indicating that casualties could be higher.

“The number of dead and injured was mentioned in our police station chief’s report just after the incident," he said. "Maybe there could have been more casualties later but I'm not sure about that and I believe the higher authorities will issue a special report soon," he said.

Abdugheni Osman said that more than 70 government workers of Aksu City had been sent to Aykol Town to monitor the activities of Peyshenbe Bazaar Mosque as part of security checks since the beginning of Ramadan.

Some residents in Aykol town said the clashes could have been triggered by restrictions on prayers. A woman whose 19-year-old son was among those arrested said 15 security forces, nearly all of them armed, stormed into her house on the night of the incident looking for the teenager.

They asked me where I hid my son, I told them he went to get a haircut and never came back,” she said, speaking on condition of anonymity. She said she heard gunshots early Thursday morning as hundreds of security forces took up positions in Aykol town.

Villagers told the woman that the clashes were triggered by moves by the authorities to stop residents from neighboring Sayerik town from performing their prayers at Aykol town.

The Uighur declared independence in October 1933 but the region went under the control of communist China in 1949.

There has been immigration of Han Chinese, a majority ethnic group to East Asia, which subdued Uighur influence in the region and made them a minority.