Sunset on Tuesday will mark the beginning of the month of Ramadan for the world's 1.2 billion Muslims -- a special time of fasting, spiritual reflection and togetherness. 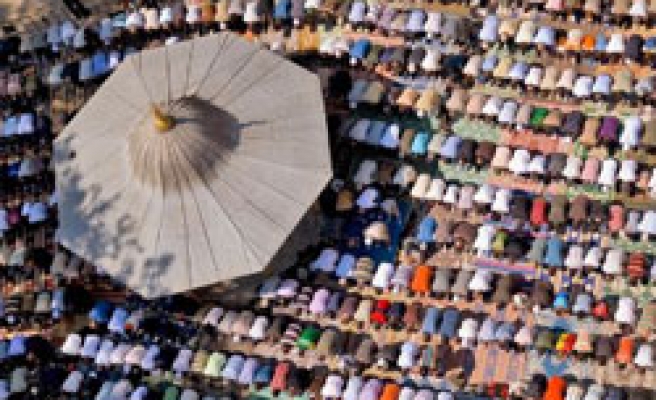 Sunset on Tuesday will mark the beginning of the month of Ramadan for the world's 1.2 billion Muslims -- a special time of fasting, spiritual reflection and togetherness. For Muslims in Turkey, the advent of the month means an increase in worship, social gatherings and community events in addition to the perpetuation of age-old traditions and customs.

Ramadan is the holiest month of the year in the Islamic calendar, on the merits of it being the month in which the Muslim holy book, the Quran, began to be revealed by God through the Angel Gabriel to the Prophet Muhammad. However, the month is perhaps best known because for Muslims it is the month of fasting, one of the five pillars of Islamic practice.

As the Islamic (Hijri) calendar is lunar-based, Ramadan begins about 10 days earlier each year. This year the fast will begin amidst a scorching August, and the long summer days mean that the first fasts -- observed from dawn until sunset -- will be about 16 hours long. In the Islamic tradition, fasting involves abstention from food, drink (including water) and sexual intercourse from daybreak until sunset. It is also recommended that fasters put forth extra effort to avoid sins, such as lying and cheating, during the holy month. Muslims who are sick or have a medical or physical condition that would make fasting harmful for them (such as pregnancy, diabetes or mental illness) are religiously exempted from fasting Ramadan.

A typical day for a faster in Turkey begins before dawn with suhur, a pre-dawn meal eaten to fortify an individual for the upcoming day without food or drink. The fasting individual abstains from food, drink and sex until after the sun has set, whereupon they partake of a fast-breaking meal known as iftar. The iftar marks the end of a day's fast and leaves the worshipper free of the restrictions of the daytime (except, of course, for sinning) until the next dawn. Suhur and iftar meals are generally eaten in company if at all possible, whether in family homes, school dorms or workplaces. In Turkey there are many special dishes and drinks that are traditionally prepared during Ramadan, such as güllaç and Ramazan pidesi.

Fasting is a physical act with deep intended spiritual meaning, as fasters take a step toward understanding people in need by depriving themselves of essentials -- like food and water -- for a brief period of time. In addition to fasting, many observant Muslims spend more time during this month focusing on the Quran and performing extra prayers, as Ramadan is known as well as a great time of forgiveness from God for transgressions. At mosques, believers gather nightly for a special prayer performed only during Ramadan -- terawih. Preferably offered in congregation, the prayers precede each day of fasting. As days in the Islamic calendar begin at sunset, tonight will be the first night of terawih prayers at mosques, preceding tomorrow's first fast.

Although focused around a serious spiritual element, in Turkey Ramadan is also a time of festivity. Friends and relatives visit one another frequently for iftar dinners and even suhur meals, and municipalities and civil society organizations organize iftars, festivals, book fairs and other activities for children and adults after the sun has set.

Charity is also a major characteristic of this month -- believers with sufficient financial resources must donate a minimum amount in charity (this year around TL 7), but many donate much more than this, and Turkish charity groups organize successful drives for monetary and food aid that is distributed in Turkey and around the world during Ramadan. Many individuals, businesses and even municipalities also host public iftars to feed those who are unable to afford a decent iftar meal.

On the first day, believers gather at mosques in the morning for a special prayer, before dispersing to visit family and friends. Small amounts of money and sweets are distributed to children, and in Turkey schools and official institutions have the entire break off, while many businesses are closed on at least one of the three days.