Organizations and businesses across Turkey have decided to give up their traditional iftar (fast-breaking dinner) programs and send aid to drought-afflicted Africa instead. 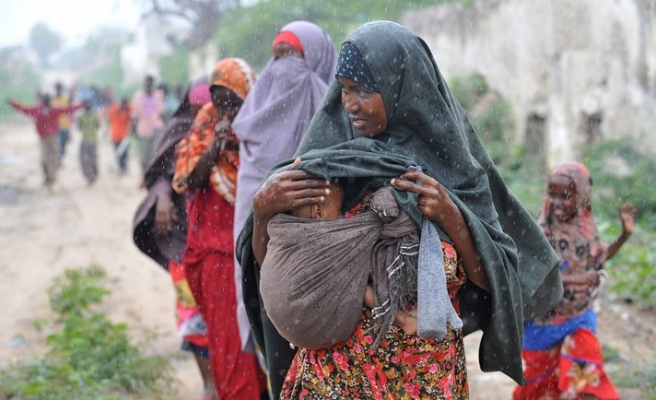 Organizations and businesses across Turkey have decided to give up their traditional iftar (fast-breaking dinner) programs and send aid to drought-afflicted Africa instead.

Bartın Active Businessmen Association (BAKİAD) announced that it will also share iftar with those starving in Africa this year. The association members decided to donate TL 10,000 to Kimse Yok Mu which will send it to people in Africa.

BAKİAD President Birol Dikyurt said that it is not possible to remain indifferent to the human tragedy in Africa with 10 million people in peril of starvation.

Dikyurt said that BAKİAD traditionally organizes iftar dinner services in Turkey for its members and leaders. Last year, however, the association decided to dedicate its iftar budget to those less fortunate in Pakistan.

"This year we decided to share iftar with Africa, which is facing the most severe drought in its history. As industrialists and businessmen, together with our members in Africa, we have decided to provide aid to Somalia."

Dikyurt said that the joy of Ramadan this year is to be able to partner with suffering countries in need of support. He urged citizens to support charity organizations that are helping aid the pain of those in chronic hunger in Africa.

Last year BAKİAD provided iftar dinners for those in need in Pakistan.

Every year MİSAŞ Chain Stores, one of the largest businesses in Elazığ, provides iftar dinners for its managers, suppliers and customers. This year, however, MİSAŞ has decided to cancel its annual Ramadan tradition and send the cash value of these meals to Somalia, which is struggling with its most severe drought in half a century.

Aytunç Sunguroğlu, chairman of MİSAŞ's board of directors, says, "The people struggling with drought and grappling with death in Somalia are also our brothers." He says this philosophy of brotherhood is appropriate to the fasting season, and is behind MİSAŞ's decision to cancel its traditional iftar dinners and instead send aid to those in need in Somalia.

The Civil Servants' Trade Union (Memur-Sen) also decided to cancel its iftar dinner program and instead send that money to help starving people in Africa. Memur-Sen's President Yusuf Yazgan said solidarity and unity are necessary in Ramadan. "Africa is experiencing a humanitarian crisis. Unfortunately hundreds of people are dying of hunger and thirst. Our branches and headquarters will organize and send the money ordinarily used for iftar programs. As the civil society, we could not remain indifferent to this despair," he said in a written statement.

The Malatya Tradesmen and Artisans Chambers' Association (MESOB) similarly announced that it has called off its plans for iftar dinner programs to help poor families in Africa. MESOB President Şevket Keskin said in a written statement that the association would send money usually spent to hold iftar dinners to the Directorate of Religious Affairs, which will then transfer it to African countries. "Every family and every tradesman should provide an iftar to one family," he said.

"The abundance of Ramadan should be shared with families in Africa on the brink of starvation," Keskin said. He believes that MESOB will help to share in such a way.