A Ramadan tent set up alongside the Zafer Mosque in the Russian capital of Moscow will begin operations on Friday with an inaugural Turkish Day celebration. 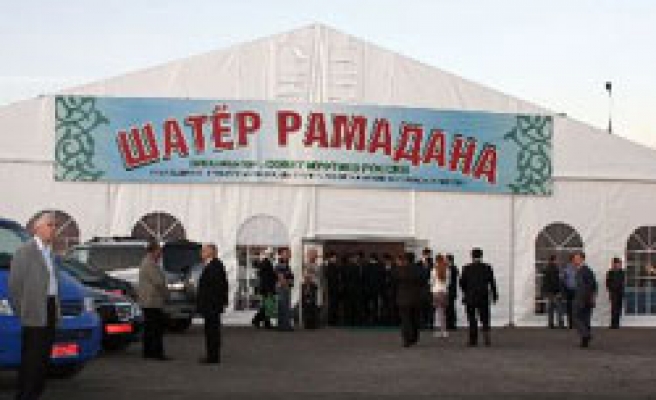 A Ramadan tent set up alongside the Zafer Mosque in the Russian capital of Moscow will begin operations on Friday with an inaugural Turkish Day celebration.

The tent was set up for the first time back in 2006 by the Ankara Metropolitan Municipality, and in time has grown and set an example for similar setups in other parts of Russia.

A major step was taken recently in adding the activities held at the tent to the official list of the city's religious activities, holidays and festivals. This means that it will be easier to set up the tent in future years, without going through a long application process.

Following the official start of tent activities today, they will proceed with Turkish Day, to be held tomorrow, Russia Muftis Council Vice President Mustafa Kütükçü told the Cihan news agency, inviting all Turks living in Moscow to come to the tent for an iftar on Aug. 27.

Noting that representatives of the Russian Orthodox Church, the Buddhist tradition and the Catholic Church would be present at the opening, Kütükçü said: “Many have been invited to the opening, including people from the lower house of the Russian Parliament, the Duma; the upper house, the Federal Council; Moscow city administrators, academics and many members of the press. It can be seen that such activities are making Ramadan be felt more in Moscow.”

The Turkish Day, to take place through the participation of the Turkish Embassy's Religious Affairs Undersecretariat, will be followed by other days devoted to other societies. Among these are Azerbaijan, Turkmenistan, Dagestan and Tataristan; the organizers of each day will decorate the tent accordingly. The activities to be held as part of these days will take place before iftar.

And the tent itself has been transformed into a festival grounds. On the weekend, performers and clowns will be brought to entertain children visitors. Due to Laylat al-Qadr (the Night of Power, the most important night in Ramadan) on Sept. 5, there will be a Quran recitation competition held, with participants coming from amongst Muslims living in Moscow. Last year the tent was open for 10 days; it will serve for 15 days this year.

The first tent set up, through the contributions of the Ankara Municipality, were given as a gift to the Saratov region, making it the first time a Ramadan tent had operated in Saratov.

The food at the tent is supplied by Orgavita, which operates in Russia and is owned by the Turkey-based Çalkan group.