Görmez announced the launch of two new programs to be implemented during Ramadan, the Islamic month of fasting. 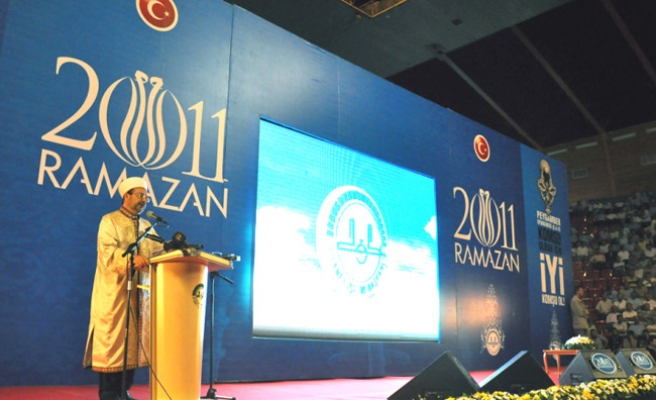 Religious Affairs Directorate President Mehmet Görmez on Thursday announced the launch of two new programs to be implemented during Ramadan, the Islamic month of fasting.

The first program is named "Çağımıza Yeni Bir Komşuluk Aşısı" (A New Brotherhood Vaccine for Our Age) and focuses on the promotion of neighborly relations during the month of Ramadan, Görmez said.

The second program is called "Her Evden Bir Fitre Bir İftar Afrikaya" (One Fitrah and One Iftar to Africa from Every Home). Fitrah describes a small amount of alms Muslims give to those in need during Ramadan and iftar is the dinner Muslims prepare to break their fast during the month of fasting.

Görmez, speaking at the Atatürk Sports Hall, said the campaign, which will commence on Aug. 1, was organized in cooperation with other religious officials.

He said the goal of the first project is to revive neighborly relations. "To be close to our dear Prophet, we must be good neighbors," he said.

In recent years, increased immigration, different lifestyles, rapid urbanization and a growing emphasis on individuality have captured people's passion and had a negative impact on neighborly relations, Görmez said. This is why a campaign to remind people of the spirit of brotherhood during Ramadan is important, he said.

Görmez noted the implementation of the project will be practical. During Ramadan, Görmez said, all speeches and programs will focus on fostering neighborly relations. "For example, we will say, 'Share an iftar dinner with your neighbors'," he said.

Görmez also explained the name of the brotherhood campaign. "In large cities today, a neighborhood vaccine is necessary." He said the project will simply remind everyone of a feeling that already exists in their hearts but that people may have forgotten. Neighborly relations will act as a sort of cure for the ills of society, according to Görmez.

The second program, Görmez said, focuses on the grave situation in Africa.

Africa is the poorest continent in the world with more than 40 million people on the brink of starvation, Görmez said. One in three Africans is undernourished. The conditions are worst in East Africa -- especially Somalia, Ethiopia, Kenya, Eritrea, Tanzania, Uganda and Burundi -- which has suffered from its biggest drought in 60 years, he said, adding that the drought has threatened the lives of thousands of people in the area.

The purpose of this second project, he said, is to bridge the geographical distance and break down complacency.

Those who wish to participate can write "AFRİKA" in an SMS and send it to 5601 from any mobile operator to give a TL 5 donation.

Three SMS messages will add up to an iftar dinner for one person in need in Africa. The Religious Affairs Directorate determined the price of fitrah this year to be TL 7.50, but Görmez added that people should try to give more than TL 7.50.

"Everyone must decide for himself how much he can give, but this is the minimum," he said.

During Ramadan it is easy to forget the realities of the world with luxurious iftar dinners, Görmez said, but "we must come together in the spirit of fasting" and remember the real purpose of iftar.