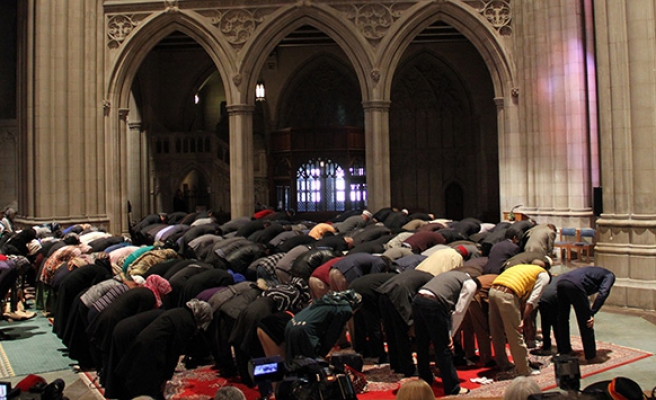 The Washington National Cathedral has hosted Muslims for prayer for the first time on Friday.

Organized by the South African ambassador in Washington, Ebrahim Rasool and several Islamic communities in the U.S., including the All Dulles Area Muslim Society, and the Islamic Society of North America, American Muslim leaders were invited to lead the Friday prayer in the cathedral.

"Undoubtedly this event builds a bridge among religious communities. We have held several events with members of other religions and these kinds of events give us the opportunity to be together, co-exist and strengthen the society as a whole," said the chair of another organizer the Council on American-Islamic Relations’ national board Roula Allouch said.

The National Cathedral's canon preceptor Gina Gilland Campbell welcomed to the Muslim community saying that they are pleased to host the Friday prayer.

She said that they have previously hosted several events together with Muslims, Christians, Buddhists, Jews and many other religious groups.

The call for prayer, Adhan, was recited by the All Dulles Area Muslim Society imam Mohammad Majid and the khutbah - the sermon before the prayer - was read by South African Ambassador Rasool.

The Friday prayer at the national cathedral was significant in terms of interfaith dialogue, All Dulles Area Muslim Society board member Rizwan Jaka told AA.

He said that they call for the protection of the religious freedom via the event noting that all religions including Islam, Christianity, Judaism should be respected.

"We have held several events here previously. In 2008 we hold an iftar dinner in Ramadan, but today, for the first time we will hold Friday prayer here. We are for religious freedom," he added.

"In the regions rocked by wars the word "Allahu Akbar" frighten people as it is called for fighting but its meaning is 'God is great,'" he said. "Prophet Mohammed, Jesus, Moses and all other prophets gave the same message. It is a message from Prophet Abraham which says as our God is one, our message, our world, our moon is one."

The National Cathedral often hosts national events, such as presidential funerals, and has hosted Muslims at various interfaith services in the past.

At the beginning of sermon a woman protested the prayer and the National Cathedral authorization to allow Muslims inside the sacred national institution.