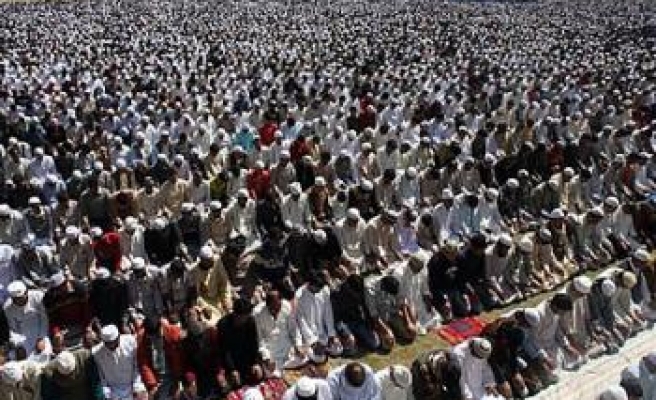 Muslims in Zambia have joined millions of people around the world in celebrating Eid al-Fitr, the three-day feast that follows the Islamic month of Ramadan.

"Eid al-Fitr is one of the two most important holidays on the Islamic calendar," Sheikh Zimba Phiri, national coordinator of the Islamic Council of Zambia (ICZ), told Anadolu Agency.

"It is a time for rejoicing and celebrating the completion of the fast, as is the obligation of all Muslims who have reached the age of maturity and are physically and mentally capable of performing it," he said.

During the feast, he explained, Muslims share food with their poorer neighbors and offer prayers for communal peace and reconciliation.

According to the ICZ, the first day of Eid fell on Thursday, but many Muslims in the country observed the festival on Friday.

On the occasion of the feast, Zambian President Michael Chilufya Sata extended his best wishes to the country's Muslims.

Similarly, former ICZ national coordinator Adam Judas Phiri called on Muslims to use the 30-day fasting period to better the lives of the people in their communities.

"For instance, we have a bumper harvest [this year] but there will still be people that go hungry because some people don't want to share," he said.

Phiri also appealed to Muslims to use the Ramadan fast to reflect on the country's problems and pray that the national leadership is able to fulfill the people's needs and expectations.

"Ramadan teaches people to be self-retrained," he said. "Some people become obsessed with food; Ramadan is a time to be reminded that food isn't everything."

For Zambian Muslim Musa Kachingwe, Eid signifies the completion of thirty days of fasting and the beginning of Allah's blessing.

He said that people who felt they had not done enough during the fasting period could use the Eid as a "fresh start."

Kachingwe said he was happy to be a Muslim in Zambia because the situation in the country was fairly manageable.

"In Zambia, I am able to practice my religion in any way without hindrance from anyone because the constitution provides for freedom of belief," he told AA.

Said Kabwe, another Zambian Muslim, said Eid celebrations in the country were generally organized by Muslims communities, although there was a need for occasional assistance from other communities.

"Otherwise, everything is done locally by local people through donations and fundraising," he said.

Islam arrived in Zambia with the Yawo people from Malawi, along with Asian communities who arrived from South Africa after the introduction of the railway in the 19th century.

The first two mosques in Zambia were built in Lusaka at the Arackani Barack and the Chibolya compound.

Muslims currently account for between 5 and 12 percent of the country's population of roughly 14.2 million.