Anti-Islam protestors face off with nationalists in Australia 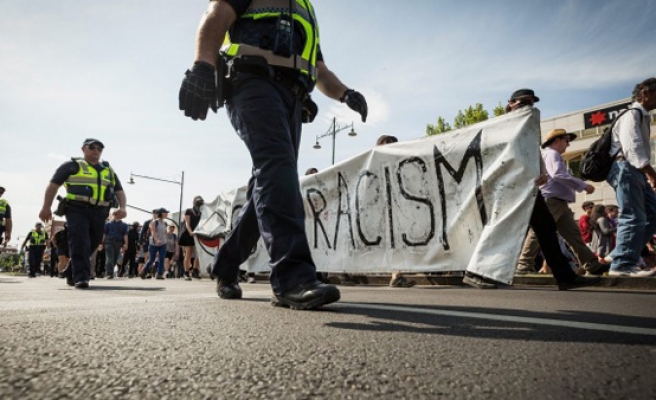 A strong police presence prevented anticipated violent clashes Saturday between rival protesters supporting and opposed to plans to construct a mosque in an Australian city.

Several scuffles broke out -- one in which two protesters were arrested for carrying knives -- but organizers of both groups told Anadolu Agency that it was generally a peaceful event.

A previous anti-mosque protest in August had forced the center of the city to be shut down due to confrontations.

Praise for the Victoria Police’s even-handed actions appeared to be unanimous.

Victoria’s Minister Police Wade Noonan told Anadolu Agency that police “did outstanding work in Bendigo,” and expressed his gratitude “on behalf of all Victorians.”

“It is clear from the low turnout in Bendigo that Victorians reject racism,” he added.

The coordinator of the United Patriots Front, Blair Cottrell, told Anadolu Agency that he estimated there were 3,000 anti-mosque demonstrators. Victoria Police, however, estimated the turnout was closer to 350, with another 250 people joining the anti-racism/pro-diversity demonstrators.

Both the United Patriots Front and No Room for Racism exchanged heated slogans.

While anti-mosque protesters shouted “Aussie, Aussie. Aussie, Oi Oi Oi” and “no mosque,” the anti-racist protesters retorted with “Nazi scum off our streets.”

The rival protests were triggered by Victoria's planning tribunal approving a permit for Bendigo’s first mosque despite opposition to the project from some local residents.

They came after an anti-Islam rally the night before outside a mosque in the Sydney suburb of Parramatta, where a 15-year-old shot a police accountant dead outside police headquarters last week, before dying when police opened fire.

The United Patriots Front’s Cottrell told Anadolu Agency on Saturday that the group represents “the will of the people of Bendigo.”

“The local council is telling the people they have to have it [the mosque] instead of asking them if they want it,” he said.

Bendigo Mayor Peter Cox has disputed that claim, telling Anadolu Agency that the application for a permit to build the mosque followed the normal planning process.

“After the council approved it, there were 13 objections that went on to the planning tribunal, which supported the planning application and issued the planning permit,” he added. “Now there are two objectors gone to the Court of Appeal. That’s being held mid November.”

Around 300 Muslims live in Bendigo and its surrounding area.

Victorian Premier Daniel Andrews has described the campaign against the Bendigo mosque as "hateful".

On Friday, he sat down with the city’s religious community leaders and Mayor Cox ahead of the protests.

“Bendigo is much bigger and much better and much more respectful and inclusive than what we have seen in the recent few months,” Andrews said.

"The diversity of this community is the greatest strength of this community. What's been occurring is wrong, it's hateful, and it's not in accord with the values that Victorians hold dear,” he added.

"And our message to the wider Islamic community is that they're hardworking people and they deserve our respect. And we intend to make sure that they get it."

Suggesting that many of the people attending Saturday’s rallies would come from out of town, Andrews argued: "You've got people who wouldn't know how to spell Bendigo coming to Bendigo, trashing Bendigo's good name.”