Chinese Muslims in the Xinjian region have been dealt another vicious blow with Chinese authorities banning common Muslim names for the Uyghurs in Xinjian province. 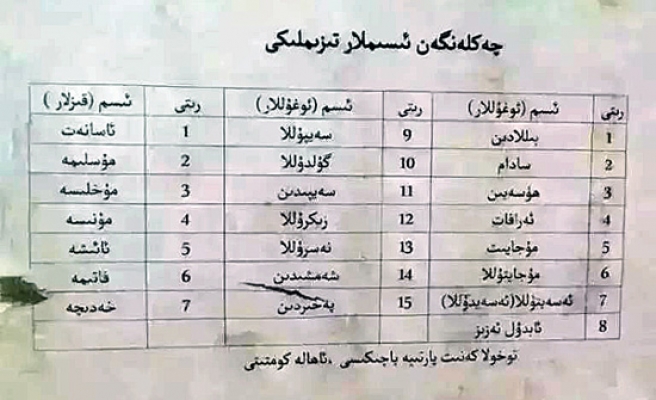 Chinese authorities have clamped down on Muslims in the troubled region of Xinjiang China. Officials issued a ban on 22 Muslim names among Uyghur residents in a bid to "discourage extremism". Parents have been issued with a warning that children will be banned from school unless their parents change them, according to local police and residents.

A Uyghur woman, Turakhan, who lives in a suburban village county in Hoten (Hetian) prefecture told RFA’s Uyghur Service on Wednesday that the village chief and police had issued a notice regarding “the list of forbidden Muslim names.”

The police also told Turakhan: "It is the decision of the township and village authorities. Don’t ask any foolish questions.”

Turakhan later learned that authorities banned children whose parents did not change their names from attending kindergarten and elementary school, she said.

A photo of the official announcement banning 15 popular Muslim first names for males and seven for females first appeared on Sina Weibo, China’s version of Twitter, and was widely circulated via the messaging app WeChat.

The announcement was issued by the Tokhola (Tuohula) Village Communist Party Committee and village administration in Hoten prefecture.

The banned female names are Amanet, Muslime, Mukhlise, Munise, Aishe, Fatima, Khadicha. All these names are common amongst Muslims all over the world, irrespective of race.

“Giving children religious or ethnic names is a basic human right,” he told RFA. “Even in China’s constitution and regional ethnic autonomy laws, there exists no such forbidding of names.”

Hesen noted that some high-raking, pro-China and pro-communist Uyghur officials have had typical Muslim names, such as Seyfiddin Azizi, Isma’il Ahmed, Nur Bakri, since the Chinese revolution in 1949.