Making a play on the online acronym of "LOL" , a troupe of clowns calling themselves the "Loldiers of Odin" have taken to Finlands streets in the city of Tampere, in a show of humorous reply to recent controversial street patrol activity in Finland. 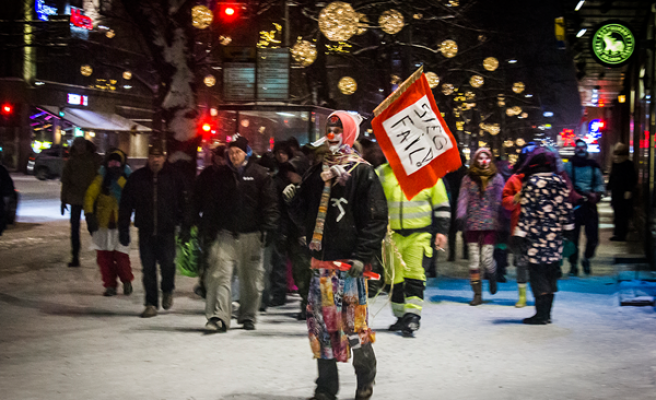 A much-contested street patrol organisation calling itself the Soldiers of Odin has spurred new competition – albeit an extremely tongue-in-cheek one.

A group of professional clowns giving themselves the name Loldiers of Odin marched, danced and leaped through the streets of Tampere on Saturday in colourful garb, sporting comical flags and tambourines.

The name of the group use the online acronym "LOL" (laugh out loud) and the word "soldier" in the name of the nationalist street patrol group. Their blog states that their intention is to make Finnish streets safer and more fun for everyone.

The timing for the clowns' parade was no accident, as it coincided with the Soldiers of Odin patrol in the same area. The Loldiers walked and danced behind the Soldiers of Odin group while singing humorous songs and joking around. They carried flags and signs with logos and catch phrases playing off of similar signs used by Neo-Nazi sympathisers who were labelle as "anarchists" by the group on their Facebook page.

The Soldiers of Odin group have been accused of being a far-right group with more than 40%in a commissioned survey supporting the group with PEGIDA in Finland also lending their support.