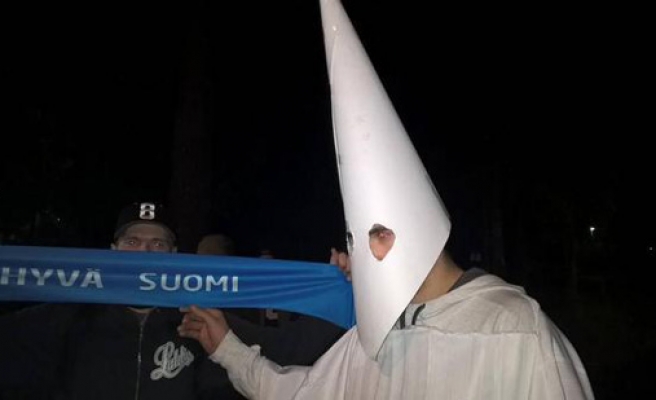 Demonstrators threw stones and launched fireworks at a bus full of asylum seekers arriving at a reception centre in Lahti in southern Finland, late on Thursday, Finnish media reported on Friday.

Between 30 and 40 demonstrators, one in a white robe like those worn by the white supremacist Ku Klux Klan in the United States, waved the Finnish flag and shouted abuse at the bus.

Meanwhile, a petrol bomb was thrown at another reception centre in Kouvola, also in southern Finland, police said. No one was known to be hurt in the incidents.

"The Finnish government strongly condemns last night's racist protests against asylum seekers who had entered the country," the government said in a statement. "Violence or the threat of violence is always to be condemned."

Prime Minister Juha Sipila this month offered to take in refugees at his home, a move that attracted international attention but also criticism in Finland.

"Sipila's noble-minded gesture was like a Christmas gift for human traffickers and refugees. The news about open doors in Finland have sent many young men on a journey towards the promised land," Mika Niikko, a deputy from anti-immigrant party The Finns, said last week in a statement.

So far this year more than 13,000 asylum seekers, most of them from Iraq, have come to Finland, compared to just 3,600 in the whole of last year.

In recent days, about 500 refugees per day have crossed the Finnish land border in Tornio, near the Arctic Circle, after a long journey through Sweden.

The Finnish government has launched random border checks and identity checks around the country amid the influx of refugees.

Finland was the only European Union state to abstain from this week's vote about relocating asylum seekers across the member countries. It accepted its 2 percent share of 120,000 asylum seekers in question but said it was opposed to a mandatory quota system.