An Iowa born and raised Indian Sikh man, fed up of the Muslim bashing stood up against Trump at a rally, knowing full well what he was in for. 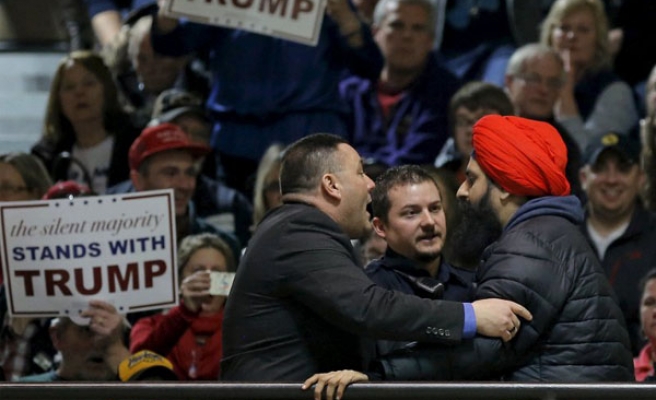 “If you don’t get out of here, I’m going to hit you!” barked the 40-something-year-old angry white man at Arish Singh. What did Singh do that made this man want to beat him up? Singh had simply denounced Donald Trump’s Muslim bashing at a campaign rally Sunday in Muscatine, Iowa.

Singh is a brave soul who ventured into the belly of the beast—a Trump rally —wearing his traditional Sikh turban and sporting a beard, both considered articles of faith to Sikhs.

But as Singh explained to me, “Social justice and defending people in need is part of the Sikh faith. You don’t have to be a Muslim to stand against anti-Muslim bigotry. Everyone should stand up against bigotry and hate regardless of the target.” Singh was not only upset with the way Trump has demonised Muslims but the fact that recently a Muslim woman for simply wearing a hijab was thrown out of a Trump rally for simply standing in silent protest. This is what motivated Singh to do something.

Travelling to the venue with his friend Taylor Williams to attend Sunday’s Trump rally, it is only a time of not if but when Trump will launch into his hateful tirade against Muslims and minority groups. As he did so, 20 minutes into his speech, Singh yelled out: “Why do you give shelter to white supremacists?!” He then opened up a white sheet that said "Stop Hate".

Within seconds, security swarmed and escorted Singh out of the rally with Trump yelling out "Bye Goodbye" as the crowd chanted his name.

While being physically removed from the venue, Singh feared that the angry chanting crowd could “descend upon” him. And once Singh was outside sanding in the stairwell, that is the moment when the angry white man threatened to beat him up. Unsurprisingly, the threat was directed only at Singh, not to his white friend Williams, who was at that time the one holding the “Stop Hate” sign.

The police then escorted Singh and Williams out of the venue where the police threatened to charge the both men with “inciting a riot.” What is far worse is what would happen if Trump supporters were angrier or at worse if  Trump suggested they do something?

Singh, a writer and a comedian,  said he was greatly alarmed that white supremacists had openly been calling voters to support Trump in Iowa and that Trump had failed to denounce these hatemongers.

In prerecorded phone messages, a well-known white supremacist leader had been urging voters in Iowa to support Trump because Trump understood that “we need smart, well-educated white people who will assimilate to our culture.” And Trump has been a boon to white supremacist groups, which have seen a “Trump bump” in membership because they are excited by his hateful campaign rhetoric directed at minorities.

Singh fears that Trump’s words could do more than embolden haters—they could inspire violence. He pointed to the Latino immigrant beaten up in August by “passionate” Trump supporters in Boston as an example. And Singh expressed his concern that Trump could foster a climate that could lead to more Sikhs being attacked or even killed, such as in 2012 when a self-proclaimed white supremacist shot and killed six Sikhs in a Sikh temple in Oak Creek, Wisconsin.

Singh in an interview said that he would do it again, and has said that for Sikh children and other Muslim children today growing up is far more difficult than it was for him. He notes that, “Trump is emboldening right-wing white supremacy and a response is needed, even if that means I’m arrested for civil disobedience in calling it out.”