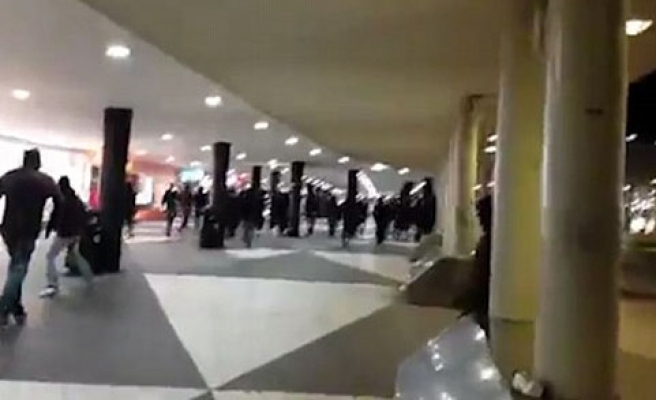 Dozens of masked men believed to belong to neo-Nazi gangs carried out a number of assaults on migrants in Stockholm overnight amid rising tension over immigration, Swedish police said Saturday.

Police had beefed up their presence in the city centre, deploying anti-riot and helicopter units after learning that extremists were planning "aggression on unaccompanied migrant minors" in the city late on Friday.

"I was passing by and saw a masked group dressed in black... start hitting foreigners. I saw three people molested," the Aftonbladet daily quoted one witness as saying.

Police spokesman Towe Hagg said by midday police had not received any complaints of assault but one 46-year-old man was arrested after striking a plain clothed officer.

Three further people were briefly detained for public order offences and one more faces charges for carrying a knife.

As many as 100 people, their faces covered, had descended in the early evening on the Sergels Torg pedestrian square, a popular meeting point for young people, including unaccompanied migrants.

Aftonbladet quoted witnesses as saying the masked group targeted "people of foreign appearance" and handed out leaflets urging the infliction of "deserved punishment on children of the North African street."

Internet site Nordfront, an online forum for the neo-Nazi SMR movement, said its "sources" had revealed that around "100 hooligans" from the AIK and Djurgarden football clubs had gathered Friday in order to "sort out the criminals coming in from North Africa."

After initially taking a generous stance on migration -- the country of 9.8 million is among the European Union states with the highest proportion of refugees per capita -- Sweden has in recent days said it expects to expel tens of thousands of people over several years as it struggles to cope with the influx.

The number of new migrants entering the country has plunged since Stockholmintroduced systematic photo ID checks on travellers on January 4.

The toughening of policy comes against a backdrop of rising concern over conditions in the country's overcrowded asylum facilities, and officials called for greater security after an employee at a refugee centre for unaccompanied youths was fatally stabbed.