NYPD 'converted' to Islam to spy on Brooklyn students

A signed 1992 memorandum barred New York City police from entering CUNY campuses without permission, however the NYPD has continued the infiltration with NYPD officers "converting"to Islam in order to spy on Muslim students. 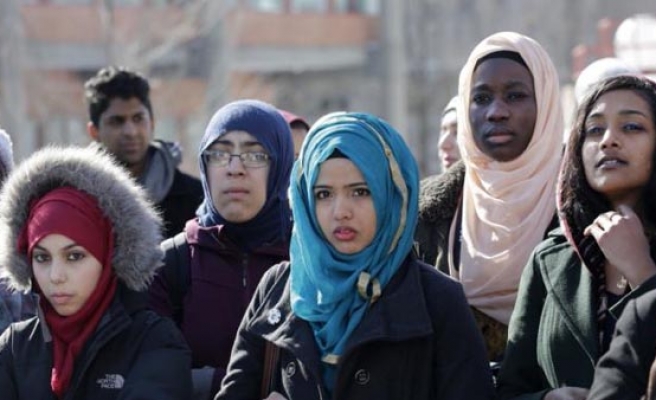 On the leafy Midwood campus of Brooklyn College, a lecture at the school’s Islamic Society had just ended when a woman stood up and asked to take the Shahada, the Muslim testimony of faith.

Nobody knew the woman with light skin and dark hair, who appeared to be in her twenties. In a voice that lilted up at the end of each sentence, she began professing her new beliefs. “Melike Ser” or “Mel,” was not a student and had no apparent connections to the school, but the students embraced her anyway, excited about her conversion.

This past April, four years after Mel’s public act of faith, two Queens residents, Noelle Velentzas and Asia Siddiqui, were arrested and charged with allegedly planning to build a bomb. The US Justice Department issued a release stating that the women were linked to members of al-Qaeda in the Arabian Peninsula and ISIL, and revealed that a Detective from the NYPD’s Intelligence Bureau was heavily involved in bringing the women to justice.

Among the ISO members, some of whom ran in the same social circles as Velentzas and Siddiqui, the arrests set off a chain of frantic text messages, phone calls, and Facebook posts: “Mel” wasn’t “Mel.” She was an undercover cop.

Three Brooklyn College graduates who had been close to the undercover officer told Gothamist of the intimate ties she developed with Muslim students, her presence during some of the most private moments of their lives, and the fear they endured when they learned her true identity.

“I felt violated,” said Jehan, 30, who met Mel years ago in the Brooklyn College ISO prayer room. (At their request, Gothamist has used pseudonyms for all the women interviewed.)

“You trust someone, you talk to them. And they were just gathering information about your community.”

While little is known about the case against Velentzas and Siddiqui, including how and why the NYPD came to involve an undercover officer in the alleged plot, it appears that Mel made an aggressive effort to befriend and surveil law-abiding Muslims years before she ever met her alleged targets, and did so at least up until December of 2014, eight months after the de Blasio administration pledged to stop the NYPD's blanket surveillance of innocent Muslims.

“Muslim New Yorkers are still fighting for basic human rights,” the Mayor said at a Ramadan dinnerat Gracie Mansion in July of last year. “We recently shut down the Demographics Unit at NYPD, which conducted surveillance on Muslim New Yorkers. Because it’s unfair to single out people on the sole basis of their religion.”

Two individuals with close knowledge of Velentzas and Siddiqui’s case confirmed that Mel is the undercover officer identified in the criminal complaint.

“For an undercover to be seeded in a community for that long without a specific target raises some deeply troubling questions about the direction of policing in our city,” he said. “Casting blanket suspicion on entire communities does not square with most New Yorkers’ understanding of the police’s role in our democratic and open society.”

Jehan has lived in New York City for 25 years. “I grew up here. To have this happen because of your religion, or your political views, it's scary. You feel alienated. And you don’t feel like this is your home.”

At first, Mel seemed warm and friendly, if a bit eager. “She was very nice, very charming,” said Shereen, who studied psychology at Brooklyn College and now works as a psychotherapist. “She wanted to do everything with us.”

Mel told the ISO women that she was a recent Rutgers College graduate who had grown up in Queens. She said that she was of Turkish descent and had been born into a Muslim but non-practicing family.

The women active in Brooklyn College’s Islamic Society were diverse. They majored in women’s studies, psychology, pre-med and political science, hung out with friends, crushed on boys, and nurtured their newfound political consciousness. They were coming of age in a city scarred by 9/11, and although their Muslim identity did not define them, it shaped their everyday lives.

But they knew their behavior was being scrutinized by the authorities. After 9/11, both the NYPD and the FBI revamped their approach to terrorism investigations and began operating under a policy of preventive prosecution [PDF]. In an internal document from 2007 [PDF], the NYPD identified particular indicators of radicalization—“wearing traditional Islamic clothing,” giving up drinking or smoking, and “becoming involved in social activism.” In the NYPD’s model of measuring threats, which have since been broadly criticized, young people were a key target.

Shereen, then 25, and a close friend, Faizah, were responsible for introducing new converts like Mel to the basic tenets of Islam. One day in early April 2011, Mel asked Faizah to meet her on campus. “Faizah told me afterward that Mel asked her some strange questions, like, ‘What is all this about jihad?’” Shereen recalled. “And asking about people who do suicide bombing.”

For Shereen and Faizah, Mel’s questions were a red flag. They suspected she was digging for information on the political beliefs of ISO members, possibly even pressing them to make incriminating statements.

At the time, Brooklyn College’s ISO was known for adhering to a particularly conservative interpretation of Islam. The group was segregated on the basis of gender, and the men and women did not spend time together socially. Mel was surrounding herself with women who covered their faces and wore long robes, but she did not even wear a hijab. Her religious practices did not seem to change, at least in the initial years the women knew her, and Mel never mentioned struggling with her new dual identity, a common experience for converts of any faith.

It was as though Mel’s decision to take the shahada, and the time she spent amongst much more observant Muslim women, had no affect on her or her religious practice. Soon some ISO members began to doubt that her conversion was genuine.

Mel was also always available to attend events and social gatherings, regardless of the time of day or the day of the week. “She would mention how she works full time,” said Rumaysa, 24, “and so then it got me thinking, is she working at these events?”

In August 2011, about half a year after Mel appeared at Brooklyn College, the AP began publishing a series of Pulitzer Prize-winning articles documenting the NYPD’s spying in Muslim communities.

One month later, NYPD Confidential reported that an undercover cop had been sent to spy on Muslim students at Brooklyn College, despite a 1992 memorandum of understanding [PDF] that barred New York City police from entering CUNY campuses without permission.

After the NYPD Confidential story broke, Brooklyn College President Karen Gould denied that the administration had known about the undercover officer [PDF], and condemned “the alleged intrusion of the NYPD into campus life.”

Muslim students continued to believe they were being watched. They decided to seek legal advice to discuss their concerns about Mel. In October, Shereen and another student approached Diala Shamas, who at the time was a lawyer at the CLEAR project at CUNY Law. The organization had recently facilitated a workshop for the Brooklyn College Muslim group about informants.

"Women at Brooklyn College shared their suspicions with us," Shamas recalled. "Unfortunately, this happens a lot. CLEAR receives concerns about potential informants or undercovers, and we can rarely help definitively confirm their suspicions. We do advise people to stay away from someone who makes them feel uncomfortable."

The students also tried to do their own digging. In February 2012, Rumaysa searched online to try to find out if Melike Ser was who she said she was.

“I tried Googling any combination [of her name] that could possibly bring up even a picture of her,” she said. “But nothing showed up, absolutely nothing.”

Without a way to corroborate their suspicions, the women decided to stay silent. “We just said, no, maybe that’s just how [Mel] is,” recalled Shereen. “Maybe we’re just too paranoid.”

It was also a question of faith. Backbiting without proof is strongly frowned upon in Islam, as is shunning a convert.

Mel continued to immerse herself in the student community, attending Islamic education classes, social gatherings, and trips to museums and the aquarium.

Shereen says Mel attending at least two bridal showers for ISO women, one of which was held in a Brooklyn College event space: "Mel shows up with this huge cake that she carried on the train."

In time, she was privy to some of the most intimate moments of the women’s lives, once even attending a wedding as a bridesmaid of a fellow ISO member.

By 2014, the Brooklyn College women had graduated, but the former students still encountered Mel around the city— at NYU, John Jay College, the MAS Youth Center, the Muslim Community Center in Sunset Park, Masjid Al-Farooq on Atlantic Avenue, and the Brooklyn Islamic Center in Mapleton, where Mel was last seen on December 30 of last year. When the women saw Mel, they generally tried to avoid her.

“The way to read an indictment like the one in this case, is with a great deal of skepticism,” says attorney Gideon Orion Oliver.

Oliver was co-counsel for Ahmed Ferhani, who was also prosecuted for terrorism after an NYPD undercover sting. In December 2012, Ferhani pled guilty to five-terrorism related offenses and one hate crime charge, and is currently serving ten years in prison.

According to Oliver, in the Ferhani case and many others, the undercover officers develop “really profound and predatory” relationships with their targets, building emotionally intimate and even familial ties over the course of many months or years.

“The government and the undercover officers have significant roles in manufacturing what they then characterize as the defendants’ plots,” he said.

“The way to read an indictment like the one in this case, is with a great deal of skepticism,” says attorney Gideon Orion Oliver.

Oliver was co-counsel for Ahmed Ferhani, who was also prosecuted for terrorism after an NYPD undercover sting. In December 2012, Ferhani pled guilty to five-terrorism related offenses and one hate crime charge, and is currently serving ten years in prison.

According to Oliver, in the Ferhani case and many others, the undercover officers develop “really profound and predatory” relationships with their targets, building emotionally intimate and even familial ties over the course of many months or years.

“The government and the undercover officers have significant roles in manufacturing what they then characterize as the defendants’ plots,” he said.