Protestors in support of PEGIDA have defied a protest ban, clashing with police in Calais 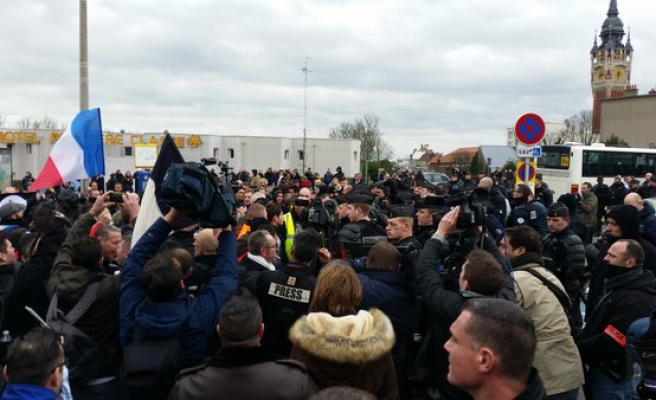 Anti-refugee protesters in the French port city of Calais Saturday clashed with police as they defied a ban and rallied in support of a Europe-wide initiative by the Islamophobic Pegida movement.

Around 150 protesters gathered in central Calais carrying signs such as "This is our home," waving the French flag and singing the French national anthem, an AFP correspondent at the scene reported.

Police issued warnings for the demonstration to disperse and then fired tear gas to break it up, arresting around 10 people, the correspondent said.

Calais has become a hotspot of Europe's refugee crisis. Around 3,700 refugees are living in a camp on the outskirts of the city, nicknamed the "Jungle", hoping to smuggle themselves across the Channel to Britain on lorries or trains.

Anti-Islamic group Pegida, which began as a movement in Germany in mid-2014 and has since spread to France and other European countries, has called on members and sympathisers across Europe to join marches on Saturday.

Ahead of the protest, Interior Minister Bernard Cazeneuve on Wednesday called on authorities in Calais to prevent all demonstrations "regardless of the organisers".

He said the ban particularly covered "all these groups that create tensions, division and violence" and would last as long as necessary.

Pegida, an acronym for "Patriotic Europeans Against the Islamisation of the Occident," has said it expects demonstrations to take place in 14 European countries.

Also on Saturday, in a relatively rare attempt to reach England by sea, four refugees were rescued from their sinking boat in the Channel thanks to a fifth refugeewho made it to shore and alerted rescuers.