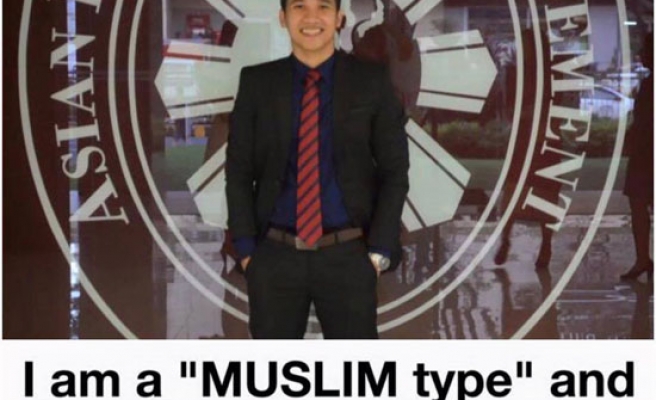 Muslims in the Philippines are voicing their objection to a term used to describe the suspected bomber of a passenger bus in the south last week, with many of them taking to the internet.

Facebook and Twitter users -- furious at what they consider to be racial profiling -- have updated their profile pictures with the statement: "I am a 'Muslim type' and I am not a bomber. #ENDdiscriminationNOW"

On Monday, the Young Moro Professionals Network underlined that the images were the result of Muslims uniting to condemn the "racist phrase 'Muslim Type'" used in an artist sketch of the perpetrator of the Zamboanga bus blast.

"Stand and stay united against any form of racism and discrimination against Muslims! ALLAHUAKBAR!!" it wrote.

Last week, police investigators released an artist's sketch of a suspect in the bombing, with the man clearly described in print below as "MUSLIM type."

The sketch followed a powerful explosion -- blamed on the al Qaeda-linked Abu Sayyaf -- that killed a girl and injured more than 30 other people as passengers alighted from a bus Friday afternoon at a crowded market bus terminal in Zamboanga.

On Monday, religious leaders of the Ulama Council of Zamboanga walked to city hall to protest the authorities' description.

National Bureau of Investigation Regional Director Atty. Ferdinand Lavin later apologized for the use of the term, but claimed, however, that it had been used by a "witness" to the bombing, not investigators.

He added that it had been included below the sketch to aid the investigation, and was supposed to be confidential, but only came to light when it was uploaded on social media sites.

"We cannot change the statement of the witness," Lavin underlined, as Vice Mayor Cesar Ituralde cautioned authorities to be more prudent in their actions so as not to offend the sensibilities of some groups in the city.

Lavin then stressed the need to move on with the investigation.

On Monday, the Young Moro Professionals Network underlined what it considered to be the real issue, stating "NOT ALL Muslims are terrorists. Some are. NOT ALL Christians are terrorists."

"They [authorities] may say that there could have been a mistake in the description of the suspect in the recent Zambo Bombing. But in reality, we all know that racial profiling happens. Not just in the south but in most areas in the Philippines," it wrote.

"The sad part of this issue is that, it [the apology] will never get 10M retweets, nor shares."

Members of Zamboanga's Christian community were also quick to show their support.

"That is offensive even to someone who is not a Muslim. I am a Catholic but I look like a Tausug," he said, using a term that refers to the wider political identity of the Muslims of Mindanao, Sulu and Palawan in the south.

Almocera asked if he were to commit such a bombing, would an artist’s sketch of him include the words "Muslim type"?

"Oh please. Stop it. Stop linking terrorism to a religion. It's very offensive. I am offended. I am Tausug looking, I am proud to have Muslim friends, I respect them. Living in this culturally diverse part of the country, we should learn to respect each other," he wrote.