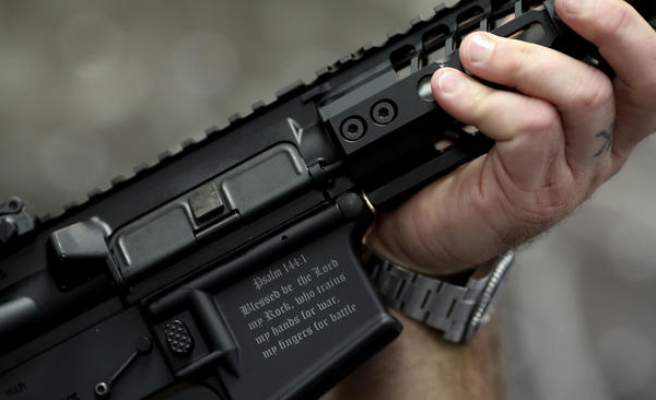 A gun shop in U.S. Florida is marketing an assault rifle branded "The Crusader," which is specifically "designed to never be used by Muslim terrorists."

The Spike's Tactical-designed rifle is laser-etched with a Knights Templar Long Cross on one side and the other side bears the text of Psalm 144:1, "Blessed be the Lord my Rock, who trains my hands for war, my fingers for battle."

The Knights Templar Long Cross was a symbol of Christian Crusaders attempting to reclaim the Holy Land from Muslims during the the Middle Ages.

Company's spokesman Ben "Mookie" Thomas said that he came with the idea, and this is a gun which devout Muslims would not want to touch.

"Off the cuff I said I’d like to have a gun that if a Muslim terrorist picked it up a bolt of lightning would hit and knock him dead," Thomas said.

Hasan Shibly, executive director of the Council on American-Islamic Relations of Florida, denounced such gun being designed.

"Is it designed for Christian terrorists?" Shibly asked. "We need to have a conversation on gun violence. There has been utter silence from gun manufacturers. It's time for them to stop trying to make a buck on this."

He also noted that there have been 205 mass killings in the United States this year and only one involved a Muslim.

Thomas said the product is meant to combat "Islamic terrorism", but the store is not targeting Muslims.

"Right now and as it has been for quite some time, one of the biggest threats in the world is and remains Islamic terrorism," Thomas said.

"We wanted to make sure we built a weapon that would never be able to be used by Muslim terrorists to kill innocent people or advance their radical agenda."

"I know many Muslims, they are good people," he said. "But, radical Muslims are destroying the world."

Shibly said he would welcome the chance to speak with Thomas and other officials with Spike's Tactical, as CAIR-FL is also opposed to religious extremism.

"They don’t have to do outlandish things for us to engage them," Shibly said.