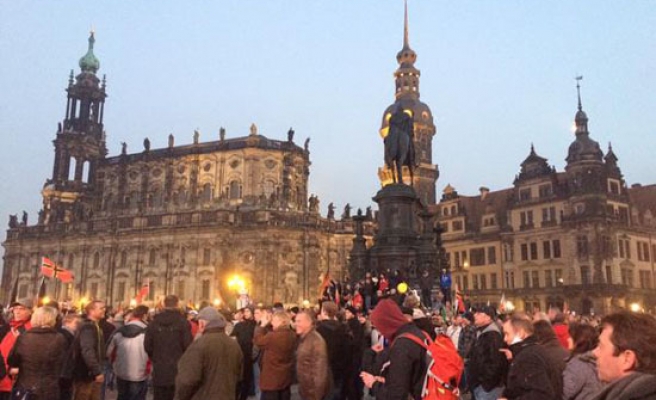 Tens of thousands of opposing protestors gathered in the east German city of Dresden on Monday to mark the first anniversary of the founding of the far-right PEGIDA movement.

Around 15,000 supporters of the anti-immigration, anti-Muslim group rallied at the city’s Theaterplatz, chanting and attacking Chancellor Angela Merkel as a “traitor”.

Protestors carried posters carrying slogans such as “Money for our children, instead of for your asylum seekers” and, in a reference to the Hungarian prime minister, “Yes to Orban! Hungary has shown how it should be”.

PEGIDA founder Lutz Bachmann told the crowd that Dresden will be the “center of resistance.”

In a counter-demonstration, a similar number of anti-fascist and leftist activists also took to the streets.

At least one PEGIDA follower was seriously injured in clashes between the two groups.

PEGIDA - Patriotic Europeans against the Islamization of the West - began weekly rallies in October last year. Its largest rally was held on Jan. 12 in Dresden following the Charlie Hebdo attack in Paris, when around 25,000 joined.

Germany has taken in the largest number of refugees as record numbers head for Europe and the surge in asylum applications has been exploited by far-right and populist parties.

Henriette Reker, a candidate for mayor of Cologne, was stabbed on Saturday by a suspected far-right sympathizer.

A record 577,000 asylum seekers came to Germany between January and September and German authorities are expecting to receive around 1 million asylum seekers this year.