The massive beach ceremony followed his visit to one of the city's notoriously violent slums, where he waded into Brazil's tense political and social debate over corruption and social injustice 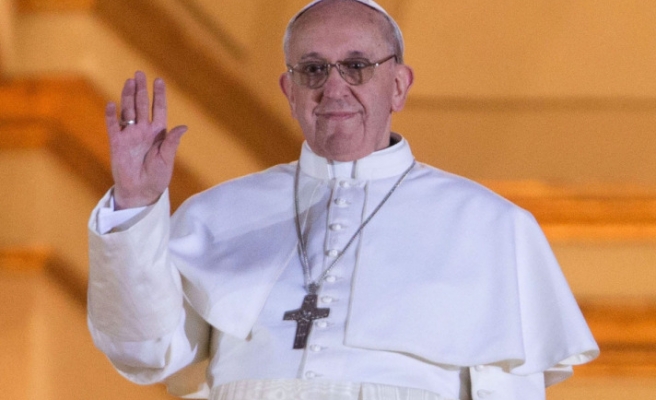 A huge crowd of 1.5 million Catholics greeted Pope Francis on Brazil's Copacabana beach on Thursday after the pontiff toured a notorious Rio slum to defend the cause of the poor.

Latin America's first pope was confronted with starkly contrasting images of life in the tropical metropolis on the fourth day of his visit to Brazil, from its ritzy seafront to its impoverished hillside favelas.

A teeming swathe of young Catholics joined dancers swaying to samba beats on Copacabana for World Youth Day, braving cold rain and wind to cheer the Argentine-born pope who has championed a "poor Church for the poor."

"I always heard that he Cariocas (Rio residents) didn't like cold and rain. Your faith is stronger than cold and rain," the pope said as he was treated to religious choirs, samba songs and dance routines.

Pope Francis repeated a theme of his weeklong visit, urging young Catholics to shun the trappings of materialism and put Jesus Christ at the center of their lives.

"Possessions, money and power can give a momentary thrill, the illusion of being happy, but they end up possessing us and making us always want to have more, never satisfied," he said.

Maria Aparecido, 53 , traveled from Sao Paulo with her eight-year-old daughter to see the pope, who had arrived in Copacabana by helicopter before being paraded along the coastline in a jeep with open sides.

"I would have liked to get closer to him, to touch him," Aparecido said as she watched the pope on a giant screen on Copacabana. "He is the pope of hope. I hope he will change the Church. We want a simpler Church of the poor."

Stefania Burgos, a 25-year-old from Ecuador, said "seeing the pope and brothers and sisters from the world over gives me great joy. I see big changes with this pope. He will revolutionize the Catholic Church."

Vatican officials have made no secret of the fact that the pope's first trip abroad since his election aims to re-energize his flock. While Brazil remains the world's biggest Catholic country, its flock has shrunk while Evangelical churches grow.

The massive beach ceremony followed his visit to one of the city's notoriously violent slums, where he waded into Brazil's tense political and social debate over corruption and social injustice that erupted in massive protests last month.

"Dear young friends, you have a particular sensitivity towards injustice, but you are often disappointed by facts that speak of corruption on the part of people who put their own interests before the common good," he said.

"To you and to all, I repeat: never yield to discouragement, do not lose trust, do not allow your hope to be extinguished," he told thousands gathered on a muddy soccer field in the rain-drenched Varginha.

Brazil was rocked by the largest street protests in two decades last month, when more than a million people took to the streets to condemn corruption, poor public services and the cost of hosting the 2014 World Cup.

During the beach event, some 500 people held an anti-corruption protest in front of the Rio state governor's luxurious apartment building.

The 1,000-resident Varginha slum is one of a dozen favelas where police have evicted drug gangs and restored security ahead of next year's World Cup and the 2016 Olympic Games.

The pope, referring to the police drive to restore order in the city's violence-wracked favelas, said tough tactics are not a solution to poverty.

"No amount of pacification will be able to last, nor will harmony and happiness be attained in a society that ignores, pushes to the margins or excludes a part of itself," he said.

"A society of that kind simply impoverishes itself. It loses something essential. Let us always remember this: only when we are able to share do we become truly rich."

Under tight security, he walked through the ramshackle streets, stopping to chat with delighted residents, kissing babies and accepting a flower garland around his neck.

He visited the humble house of a slum resident, Maria Lucia dos Santos da Penha, who said she told the pope that "this was the best gift I've ever had in my life."

He then blessed the altar of the 62-seat Sao Jeromino Emiliani church, a tiny brick building that faces competition from the favela's four Evangelical temples.

Later, addressingfellow Argentines gathered in Rio's cone-shaped cathedral, the pope hammered home his message that clergymen must live must live and work among ordinary people.

"I want the Church, parish colleges, the institutions to go into the streets," he said.

The pope returns to Copacabana on Friday for a re-enactment of the Stations of the Cross.