Fired during a December shake-up of the SI, which he joined in 1972, Stiusso had helped Nisman with his investigation of the bombing that killed 85 people. 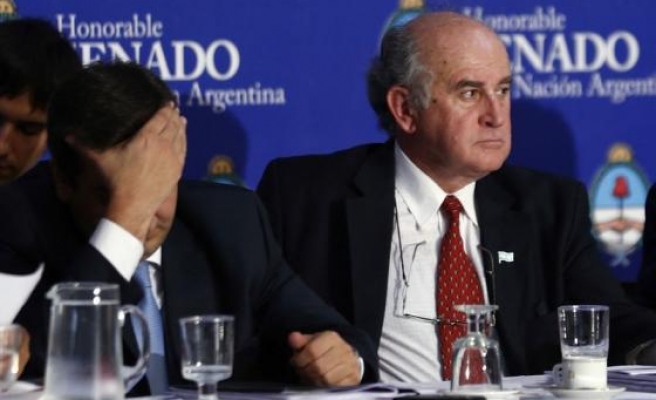 Argentine investigators failed on Thursday to track down a former spymaster wanted for questioning over the death of a prosecutor who had accused President Cristina Fernandez of covering up Iran's alleged role in the 1994 bombing of a Jewish center.

Prosecutors were unable to locate ex-counterintelligence boss Antonio Stiusso at three different addresses held in his name. One top official acknowledged the government did not know if Stiusso, who had been regarded as one of the most powerful operatives in Argentina's leading spy agency, was even in the country.

Alberto Nisman was found dead in his apartment on Jan. 18, a day before he was due to testify about his claim that Fernandez sought to whitewash his findings that Iran was behind the attack on the Jewish center, run by theArgentine Israelite Mutual Association, that killed 85 people in Buenos Aires.

"He was not at any of the properties registered as his own," Oscar Parrilli, head of the Intelligence Secretariat (SI), told reporters.

Stiusso's lawyer also appeared to be in the dark.

"I assume he is in the country, but I don't know," Santiago Blanco Bermudez told local TV station Channel 26.

Iran has vigorously denied involvement in the bombing and Fernandez has dismissed Nisman's findings as absurd. She said Nisman was duped by rogue agents involved in a power struggle and killed when he was no longer of value to them.

One of those spies was Stiusso, Fernandez's government has said. Fired during a December shake-up of the SI, Stiusso had helped Nisman with his investigation of the bombing.

"I have no doubts that Stiusso is behind all this, after the decision of (President Fernandez) to fire him from the SIDE,"Anibal Fernandez, the president's chief of staff, said on Twitter on Tuesday, referring to the top spy agency by its former name.

Parrilli said secrecy laws would be lifted so that investigators could grill Stiusso fully about the mysterious events leading up to Nisman's death. He said the president wanted "the whole truth to be known."

Stiusso's spy career spanned four decades. He was one of the most feared men in the intelligence agency, which played an important role in the military government's "dirty war" against suspected Marxist rebels, union leaders and other leftists in the 1970s.

Since democracy was restored in 1983, successive governments are widely believed to have continued to use the agency to snoop on opponents. Stiusso, whose name is often spelled Stiuso in Argentina, is believed to have been at the heart of its wiretapping operations.

"(Stiusso) is a key man given his ties to Alberto Nisman," Gerardo Young, author of a book titled "The SecretArgentina" on the intelligence community, told television channel TN. "He knew perfectly what Nisman had been working on and surely knew of his state of mind."

It remains unclear whether Nisman killed himself or was murdered. Conspiracy theories abound, with some pointing directly at the president.

No arrests have been made since Fernandez's remark two weeks ago that renegade spies were behind the prosecutor's death.

The scandal has dented the government's credibility ahead of October's presidential election, polls show. Fernandez is barred from running for a third term.