Argentina's Foreign Minister Héctor Timerman has said he has handed the country's prosecutors a list of over 100 politicians, diplomats and journalists that have allegedly been the victims of international espionage. 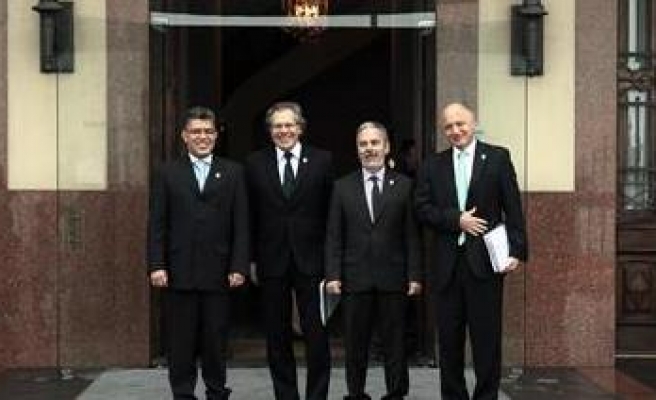 Argentina's Foreign Minister Héctor Timerman has said he has handed the country's prosecutors a list of over 100 politicians, diplomats and journalists that have allegedly been the victims of international espionage.

The high-profile figures are thought to have had their e-mail addresses and respective passwords intercepted.

Reports say the foreign minister did not identify any country he believed might be responsible, but said a senior minister from a different nation had received a similar list detailing alleged espionage of officials. Timerman was also reported as saying that "several nations of the region" had been targeted.

The surveillance network, according to some regional media outlets, refers to a spying web allegedly set up by the United States in the region that has been the subject of growing outrage by leaders of Latin countries.

Timerman said he had been passed the list by a senior official on Friday at a summit meeting of the Mercosur regional economic bloc held in the Uruguayan capital, Montevideo.

At the summit, the presidents of the Mercosur nations jointly condemned an intelligence network which, according to a number of reports by the Brazilian daily O Globo, was set up by the United States government and has targeted a large number of countries from Latin America.

A number of Latin countries have expressed outrage at reports the US had been spying on a range of targets, including politicians' and citizens' communications, military purchases and oil industries.

The reports were authored by Rio-based US journalist Glenn Greenwald, and are based on leaks from former CIA contractor Edward Snowden.

The fugitive US leaker has now applied for temporary political asylum in Russia, where he is currently stranded in the transit zone of Moscow’s Sheremetyevo International Airport.

Greenwald, who has collaborated with O Globo to publish reports that millions of Brazilians' emails and phone calls have been intercepted, had been scheduled to speak to the Brazilian Senate about the scale of the interceptions on Tuesday but cancelled due to work commitments.

The journalist normally writes for the British daily Guardian, in which he first reported the existence of Prism -- a program used by the United States' National Security Agency to monitor conversations through social networks and communications tools.

Brazil is said to be particularly concerned about whether information has been leaked about a long-anticipated contract for Boeing-made fighter jets and the country's vast, ultra-deep "pre-salt" oil reserves.

The country -- the biggest and richest in Latin America-- also expressed interest in interviewed Snowden himself, particularly if he were to accept an asylum offer from a Latin nation in the future.

Venezuela, Nicaragua and Bolivia have all offered Snowden asylum, despite US President Barack Obama threatening "serious repercussions" to any country sheltering the fugitive former intelligence contractor.

Alongside the fuss about the US espionage practices, a secondary row involving the fugitive whistleblower and Latin American nations has also been bubbling after Bolivian President Evo Morales's plane was grounded in Vienna, Austria, on July 3 when European countries said they were tipped off that Snowden -- who is wanted by the US for his involvement in leaking secret information about the country's surveillance programs -- was aboard the presidential jet.

Spain has now apologized for its part in events which led to the plane being grounded in Austria for 13 hours, after a number of Latin countries joined forces to demand apologies from the four European countries (Spain, France, Italy and Portugal) alleged to have closed their airspace to President Morales.

"We recognize publicly that the procedures used in the Vienna airport by our representative were perhaps not the most effective," Spain's ambassador to Bolivia, Ángel Vázquez, told reporters, adding that Spain "regretted the fact" that its procedures had inconvenienced President Morales and "put him in a difficult situation."

Spain, which enjoys considerable and growing bilateral trade between Bolivia and other South American countries, has already attempted to downplay the incident.

France has also publicly apologized for its role in the row.