Sunday's primary was effectively a nationwide opinion poll because the parties had already chosen their candidates and voters could cast ballots for any candidate. 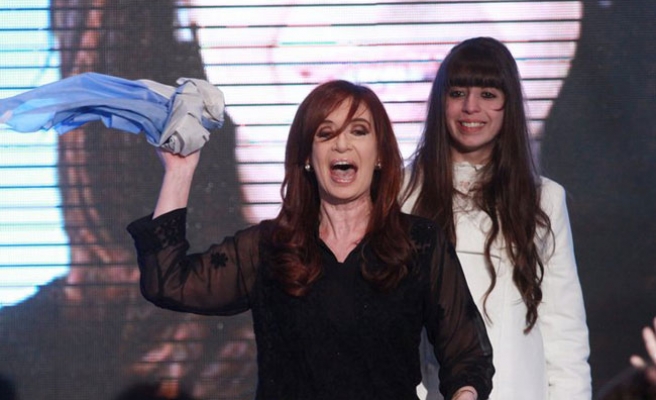 Center-left Argentine President Cristina Fernandez looks set to win a second term in October and deepen her interventionist policies after thrashingrivals in a primary election, results showed on Monday.

With nearly 97 percent of polling stations counted, Fernandez had just over 50 percent of the votes, 38 points ahead of both centrist opposition congressman Ricardo Alfonsinand former President Eduardo Duhalde.

Sunday's primary was effectively a nationwide opinion poll because the parties had already chosen their candidates and voters could cast ballots for any candidate.

A booming economy in the major grains-producing nation, Latin America's third-largest economy, has helped Fernandez, though she has enraged farmers and grain exporters with cornand wheat export curbs and policies that strengthen the hand of the state.

"With the three leading candidates in the opposition practically tied, the probability of someone stepping down to consolidate the vote against the government seems unlikely,"Felipe Hernandez, an RBS analyst, wrote on Monday.

Her "strong support ... reduces the probability of the government proactively adjusting economic policy, despite evidence of imbalances and market concerns about sustainabilityin the medium and long term," Hernandez added.

"I voted for Cristina because I see my children's progress.They all have jobs, homes, cars. We used to travel by donkey," said Aida Peralta, 81, as she celebrated to the sound ofdrumming outside the president's campaign headquarters.

Financial markets have already priced in a second four-year term for Fernandez, but some investors hoped a strong opposition contender would emerge and spark a bond and stockrally.

As of 1255 GMT, Argentina's debt spreads over comparable U.S. Treasuries had widened by 2 basis points to 718 basis points, while most other nations' spreads tightened, accordingto the benchmark JP Morgan Emerging Markets Bonds Index Plus.

"These (election) results should be seen as a confirmation of what the market was pricing: Cristina Kirchner will be re-elected in the first round. We don't expect significantnegative market reaction to this news," Barclays Capital said.

Fernandez's two main opponents, Alfonsin and Duhalde, a dissident from her own Peronist party, fared worse than expected, polling only around 12 percent each. The lawprohibits them from forming an alliance.

Fernandez, 58, won strong support in urban and rural areas including farming centers -- and has a wide lead in opinion polls. Voter turnout was high at nearly 78 percent.

Many Argentines credit Kirchner and Fernandez with reviving the economy after a 2001/02 financial crisis, when Argentina declared a record debt default that made it a market pariah.

"I call on everyone to think about the big picture, to be united. The world is in difficulty but if we manage to get over our differences ... we can learn to make fewer mistakes,"Fernandez told supporters, extending an olive branch to herrivals.

She also paid tribute to Kirchner, who died last year, and has vowed to push on with and deepen his policies that foster import substitution and subsidies for the poor.

Argentina's economy is expected to grow 8 percent this year, as high grains prices and strong demand from neighboring Brazil boost revenues despite economic turmoil in the UnitedStates and Europe.

Fernandez needs to capture 45 percent of the vote in October to win re-election outright. She could also avoid a run-off with 40 percent plus a 10-point lead over therunner-up.

"With around 50 percent of the vote, she is on the way to winning in the first round," said Mariel Fornoni, director of political consultancy Management & Fit.

"What's more, the opposition scenario is very complex. It looks unlikely an opposition leader can rally the anti-Kirchnervote behind them."