Argentine president lashes out at judiciary over big protest march

Fernandez said the march marked the politicization of the judiciary. 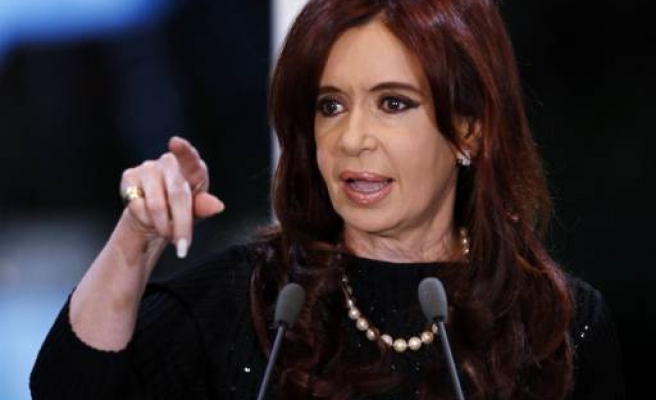 Argentine President Cristina Fernandez accused the judiciary on Saturday of launching a political battle after state lawyers organized a march to demand justice for a dead prosecutor who had been investigating her.

The protest, known as 18F, drew tens of thousands into the streets of Buenos Aires on Wednesday, a month after state prosecutor Alberto Nisman turned up dead in his apartment in mysterious circumstances.

Nisman had accused Fernandez of plotting to cover up his inquiry into the 1994 bombing of a Jewish center in Buenos Aires.

Commenting on the rally for the first time, Fernandez said the march marked the politicization of the judiciary.

"18F, the baptism by fire for the Judicial Party," Fernandez wrote sarcastically in a statement shared on Twitter and Facebook.

"The true political and institutional significance of the march was the public and now undeniable appearance of the Judicial Party," Fernandez said.

The protest, one of the biggest Fernandez has faced in her seven years in power, was summoned by a group of state prosecutors and swiftly promoted by opposition parties.

The prosecutors had previously said the rally was to honor Nisman and was not politically motivated.

The group has frequently locked horns with Fernandez's leftist government and complained of a culture of intimidation and meddling in Argentina's courts.

"It's really as strange as a march for better government would be if called for by cabinet ministers," Fernandez said.

"18F was decidedly an opposition march, summoned by prosecutors and supported by judges and the whole spectrum of political opposition," she said.

Officials said in the days leading up to the march that it was designed to destabilize the government.

Protesters said they were demanding an independent judiciary and an end to impunity for high-ranking officials.

Similar rallies were held on the same day in other cities in Argentina as well as in Chile, the United States and Israel.

Nisman's death has sent shockwaves through Argentina ahead of October presidential elections and plunged Fernandez's final year into turmoil.

Nisman had accused Iran of being behind the 1994 bombing and alleged that Fernandez conspired with Tehran to whitewash his investigations in return for economic favors.

Iran has repeatedly denied the accusation. Fernandez called it "absurd" and said rogue state security agents who held a grudge against her had misled Nisman's investigation and then killed him.