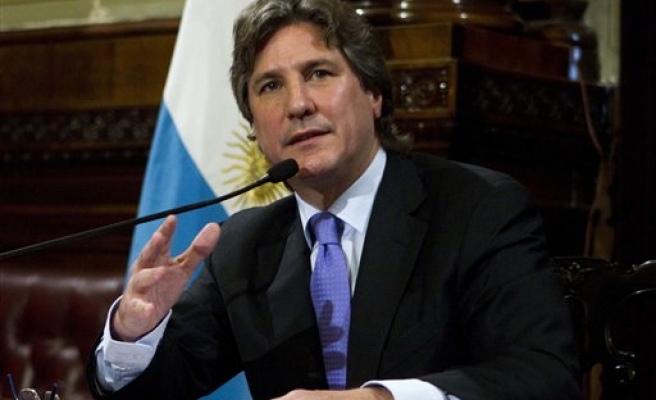 Claudio Bonadio said he elevated the case to public trial at a federal criminal court in Buenos Aires after another federal court earlier in the day rejected a defense request to dismiss the charges.

Boudou would face up to six years in prison if found guiulty.

The allegations surfaced last year when irregularities were found in the registration of a red Honda Civic del Sol that Boudou bought in 1992, a time when he was working at a sanitation services company.

Boudou changed the motor in 1995 but never filed to amend the registration, and he didn’t transfer the car to his name until 2002, when he was then working in public office. When he registered the car in his name, he used a fake address and forged the proof of residence, according to the resolution.

The vice president’s tax returns indicate that the car was bought at a now-defunct dealership in Mar del Plata.

Bonadio, however, said that at the time of the purchase, the vehicle was still in transit from Japan.

He said he is innocent of the charges, but has not spoken publicly since Bonadio’s resolution was released.

This is the latest scandal to hit the vice president, and the first to go to public trial.

The most notable case against the second-in-command is for bribery and influence peddling. He was indicted earlier this year for helping a friend’s company emerge from bankruptcy and restructure its tax debts, and then go on to win government contracts for money printing.

Boudou, the president’s economy minister from 2009 to 2011, has repeatedly declared his innocence and said that he is unfairly being persecuted by the opposition to mar the ruling Front for Victory party.

He has maintained a low profile since corruption allegations began in 2012, and is now rarely seen in public. In the years prior, the enthusiastic rock guitarist and leather jacket-wearing motorcyclist was often cited as a potential successor to President Cristina Fernandez de Kirchner.

The president has yet to name whom she will support in the 2015 presidential election, the run-up to which is expected to be rife with corruption allegations against her administration.

Indeed, Bonadio, the judge in this latest case, is investigating alleged tax irregularities by a company owned by the president’s family.