The first assault on a presidential candidate in Colombia for more than a decade has left Avella in fear for her life and her family crushed. 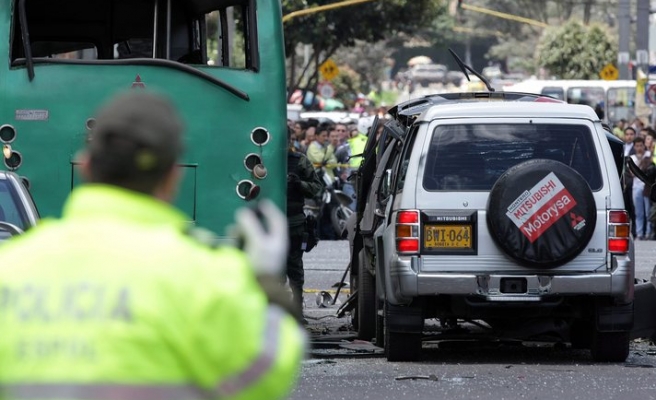 Through the noise and dust churned up by her armored car, leftist presidential candidate Aida Avella assumed the popping noise was a rock hitting the wheel.

When her bodyguards lost radio contact with the rest of her security detail travelling behind, she knew something was wrong.

Avella's convoy was under armed attack.

The first assault on a presidential candidate in Colombia for more than a decade has left Avella in fear for her life and her family crushed.

It also raises doubts about whether the country would accept a leftist government, and if a peace agreement with Marxist FARC rebels will bring an end to political bloodshed.

"I'm afraid for my life. I'm afraid for the lives of our comrades entering politics," the Patriotic Union (UP) party contender told Reuters late on Tuesday in an office adorned with pictures of the old Soviet Union and images of Argentine revolutionary Ernesto "Che" Guevara.

This is the second assassination attempt Avella has survived and one of thousands targeting UP members over the years.

The convoy carrying 65-year-old politician was ambushed on Sunday on a dirt road in the oil-rich northeastern province of Arauca, where rebels of the FARC and another group, the National Liberation Army, or ELN, have a strong presence.

The driver of her SUV continued on the road - unaware that gunmen were firing from a motorcycle at another vehicle in the convoy. The shootout left the other car pocked with 14 bullet marks.

For Avella and her family, the attack is all-the-more terrifying as it comes just three months after she returned from 17 years of exile in Switzerland. In 1996, she left Colombia when right-wing paramilitaries fired a rocket-propelled grenade at her car as she traveled through the capital, Bogota.

"I'm just back and they shoot at me," said Avella, blaming right-wing paramilitary elements. The government says the attack was carried out by the ELN.

Avella, who stands little chance of winning the presidency, said she warned the authorities of death threats against her earlier this month.

Scores of leftist candidates for Congress have also received warnings in the last few months as campaigns heat up for the March 9 vote, ahead of the presidential election in May.

"I have a collection of death threats from the 1980s and '90s. I've compared them and they are almost all the same, different logos, but the same tone," the slight, bespectacled, former union militant said. "They aren't going to stop us."

While the ambush on Avella's convoy highlights the risks for political players ahead of the elections, it also raises fears that a successful peace accord with the FARC, or Revolutionary Armed Forces of Colombia, could trigger a new wave of political persecution and bloodshed.

President Juan Manuel Santos took a political gamble in late 2012 by launching negotiations to bring an end to five decades of war that has killed more than 200,000 and displaced millions.

Colombia, for centuries a two-party - center and right-wing - democracy, has had a sketchy history as far as tolerating leftist movements.

Avella's party, the UP, was founded in 1985 after a failed peace process with the FARC brokered by then-President Belisario Betancur.

Some 5,000 members and supporters - unionists, intellectuals and communists - were killed in the years that followed by paramilitary groups set up by vigilantes to protect landowners.

"It's almost like when the UP began; the genocide against us can't be repeated in Colombia," said Avella, a psychologist and mother-of-two. "We have to avoid another bloodbath. We must prevent anyone who supports peace being assassinated."

FARC commander Ivan Marquez, who leads rebel negotiators at the peace talks in Cuba, was an early member of the UP and won a seat in Congress, before returning to the FARC.

In terms of attacks on presidential contenders, the worst bloodshed occured in the run up to the 1990 election when three candidates were assassinated, two of them from the left.

While many politicians and analysts would say Colombia has changed for the better over the last decade, Avella says things are just the same as before she fled into exile.

"Only the buildings are bigger," she said, pointing out the high levels of poverty and depressed agriculture sector.

The attack has left her more determined than ever. Running on a platform of improved health and education, higher quality jobs and help for the rural sector, Avella is likely to muster few votes from the 33 million electorate.

In the last Gallup poll in February, she received as little as 1 percent, compared with 34.7 percent for Santos.

Smiling as she compared her chances to U.S. President Barack Obama, Avella said she is not fazed: "Obama started with 1 percent too."