Morales called for an emergency meeting of South American presidents to resolve a stand-off between Colombia and neighboring Venezuela. 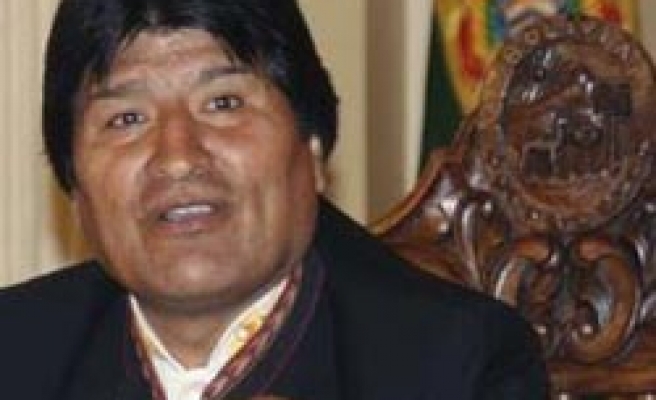 Bolivian President Evo Morales called on Saturday for an emergency meeting of South American presidents to resolve a stand-off between Colombia and neighboring Venezuela that has raised tensions in the Andes.

Morales, a close ally of Chavez, warned that the region was on the brink of war due to the pro-U.S. policies of Colombia's outgoing President Alvaro Uribe, and said the South American Nations Union, or Unasur, must seek a peaceful end to the dispute.

"I want to ask the head of Unasur, Ecuadorean President (Rafael) Correa, to call an emergency meeting of the 12 presidents of Unasur so we can resolve these problems between Colombia and Venezuela," Morales in a televised speech.

"A war is in the making and Bolivia, along with the presidents of the Unasur, should not allow that war to happen between brother countries."

Most analysts believe a military clash is unlikely, despite the harsh rhetoric. The Venezuela-Colombia border remained calm on Saturday.

Chavez has dismissed the Colombian allegations as a hoax and says they are a pretext for a possible U.S.-backed invasion of his country -- an OPEC member and South America's biggest oil producer. He accuses Uribe's government of being an instrument of U.S. imperialism.

At a function to mark the birthday of South American independence hero Simon Bolivar on Saturday, the Venezuelan leader reiterated his position that the charges were part of an international plot to undermine his socialist project.

"The preparation phase of the international community, with the help of Colombia, is in full swing," he said, adding that he had been warned it might include plans to kidnap or kill him.

Uribe will be succeeded by newly elected Colombian President Juan Manuel Santos on Aug. 7. Chavez says he hopes ties, which were turbulent with Uribe, can return to normal under Santos, who has so far been careful to avoid public comment on the rift.

Santos, who played a major role in Uribe's military sweeps against Marxist guerrilla groups when he was Colombia's defense minister, has said he favors dialogue with Caracas.

Bilateral trade that once amounted to $7 billion a year has plummeted since Chavez cut commercial ties last year in protest at a deal allowing U.S. forces to use Colombian bases. Analysts say both countries could lose if the dispute deepens.