Morales gave a televised speech on Wednesday, saying he sympathized with the protesters who clashed with police over the weekend and asking their forgiveness for police excesses. 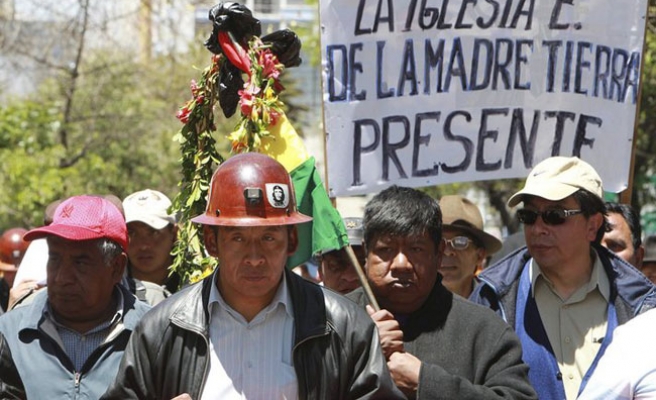 Bolivian demonstrators opposed to the construction of a road in the Amazon vowed on Wednesday to resume a month-long protest march that has become a major challenge to leftist President Evo Morales.

The march by poor Indians who live in the path of the planned $420 million road is a problem for Morales, Bolivia's first leader of indigenous descent who led many anti-government protests in his days as leader of the coca farmers.

Morales gave a televised speech on Wednesday, saying he sympathized with the protesters who clashed with police over the weekend and asking their forgiveness for police excesses. He also described the demonstrations as a "wake-up call."

"There's a split between the government and its indigenous support base that casts doubt on the government's legitimacy," he said. "For the first time in recent years, we're hearing people yell that this government should go."

Two of Morales' cabinet ministers resigned this week after police broke up the protest over the weekend, firing tear gas and briefly detaining marchers in a raid on a camp they were using en route to the Andean city of La Paz.

The defense minister quit in protest at the police raid. Morales' interior minister, who had become the focus of criticism from opposition politicians, stepped down in an apparent effort to limit political damage from the crackdown.

Emboldened by a wave of sympathy protests in urban areas and a strike called by the COB labor federation, the anti-road demonstrators said they would resume their march toward the country's administrative capital.

"Long live this historic march ... the march goes on," protest leader Mariana Guasania said in the Amazon tourist town of Rurrenabaque, where some 200 protesters have regrouped since the police crackdown.

The demonstrators, who hail from the Isiboro Secure indigenous territory and national park, want a law guaranteeing that the Brazil-financed road will bypass their territory.

Their announcement on Wednesday, and the accompanying protests by supporters, increase pressure on Morales to resolve the conflict over the government-backed road plan.

Besides reshuffling his cabinet, Morales has sought to ease tensions over the project by halting construction work and calling for a referendum in the two provinces that it would link to determine whether the project should go ahead.

But the protesters have rejected the call for a vote.

Social protests are common in Bolivia, the region's biggest natural gas exporter, but tensions have eased since Morales was elected in 2005 on pledges to give more political power to the indigenous majority.

However, it is the second time in less than a year that he has faced fierce opposition from his own powerbase over a government policy.

Late last year, a wave of strikes and street protests prompted him to roll back a hefty fuel hike.

Protests by indigenous activists opposed to the road pose a dilemma for Morales, who has put the project at the heart of his strategy to improve the country's dilapidated road system.

He blames rich countries for global warming and sprinkles speeches with references to Pachamama (Mother Earth), but critics say the road plan raises questions about his green credentials and commitment to indigenous rights.