The leftist president said work on the 185-mile highway would not be resumed unless it was approved in a referendum in the two provinces it was to link. 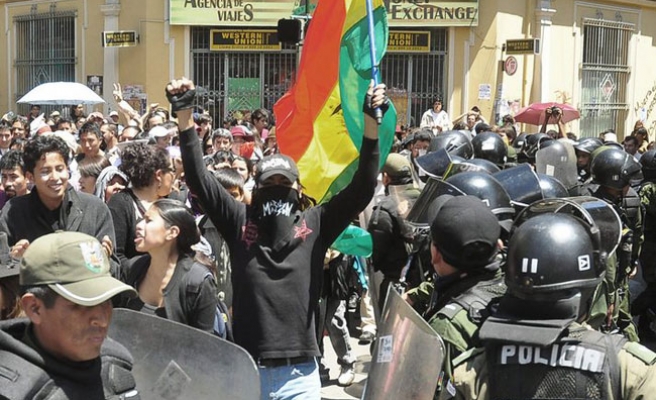 Bolivian President Evo Morales halted work on a highway being built in the Amazon on Monday, seeking to ease tensions after a month-long protest march and a police crack down on demonstrators.

The leftist president said work on the 185-mile (300 km) highway would not be resumed unless it was approved in a referendum in the two provinces it was to link.

"There needs to be national debate so the two provinces benefited or involved in this can decide. ... In the meantime, the project is suspended," said Morales, criticizing the violence used by police to disperse marchers over the weekend.

Several people were reported to have suffered minor injuries and the raid was criticized by opposition leaders, the ombudsman and several government officials including Defense Minister Cecilia Chacon, who quit in protest.

"This is not the way! We agreed to do things differently," Chacon wrote in her resignation letter, which was published by Bolivian media.

Morales, who denied giving police the order to break up the march, condemned the "violence, excesses and abuse" and said an investigation would be held.

Fierce opposition to the road proved especially uncomfortable for Morales because it was led by Indian communities who normally back his pro-indigenous reforms.

Bolivia's first president of indigenous descent, Morales has put the highway at the heart of his drive to boost infrastructure in the poor country, but that has tested his commitment to conservation.

The dispute over the $420 million project has also exposed differences within his Movement Toward Socialism (MAS) party.

Some MAS lawmakers expressed support for the demonstration and the demands of the 12,000 residents of the Isiboro Secure Indigenous Territory and National Park, which lies in the path of the planned highway.

Morales is highly popular among the Quechua and Aymara indigenous majority in the Andean highlands, but opposition to his policies is strong in the eastern lowlands, even among indigenous groups including TIPNIS indians and the Guarani.

Violent protests are common in the natural gas-exporting country, but tensions that toppled two governments in 2003 and 2005 have eased since Morales was elected in late 2005.