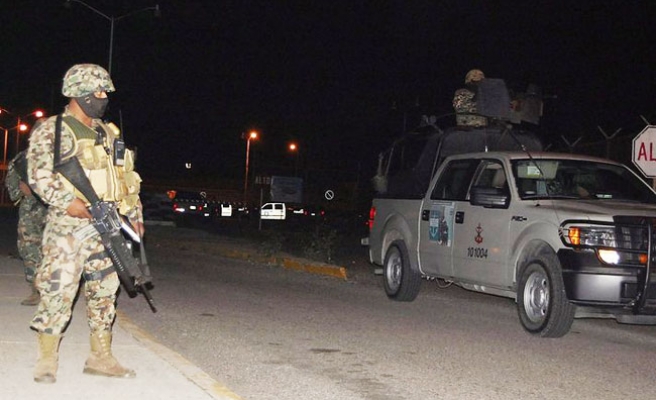 An explosive device blew up inside a truck parked outside the town hall of Mexico's northern city of Nuevo Laredo on Friday, injuring seven people but causing no casualties, officials said.

The blast comes two days before Mexico votes for a new president to replace Felipe Calderon, who has waged a 5-1/2-year battle against drug traffickers.

Police did not immediately confirm whether the attack was drug-related but Mexican cartels have been increasingly using improvised explosive devices in cars. Most are relatively small compared to the car bombs used in conflict zones such as Iraq.

The explosion went off mid-morning, tearing apart the vehicle and damaging 11 other cars as well as a wall of the town hall, the Tamaulipas state attorney general's office said in a statement.

Soldiers, marines and police sealed off the scene and were taking evidence to determine the type of explosive material used, the release said.

Staff from the town hall immediately evacuated the building and the emergency services were on alert for other blasts.

Nuevo Laredo, across the Rio Grande from Laredo Texas, has been a hotpot for drug related violence as the Zetas cartel battles rivals for control of billion dollar narcotics trafficking routes to the United States.

More than 55,000 people have died in drug-related violence since Calderon took office in late 2006.

Mexican presidents are barred by the constitution from running for a second term, but the candidate from Calderon's ruling National Action Party (PAN) is in third place, according to most polls.

Enrique Pena Nieto, of the opposition Institutional Revolutionary Party (PRI), is expected to win the election by a wide margin according to the polls.