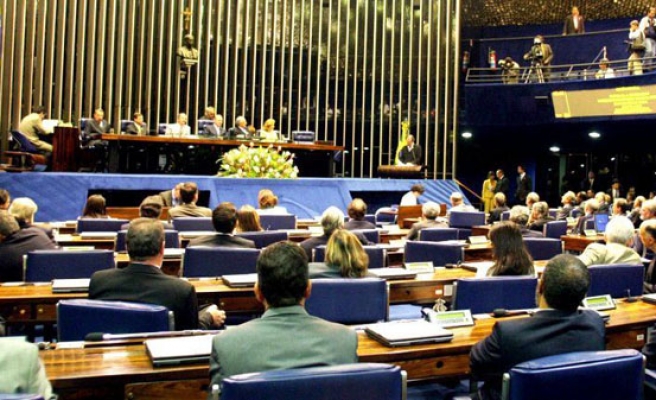 Brazil will slash the number of ministries currently in operation in a bid to cut costs and improve management and efficiency, Planning Minister Nelson Barbosa told a press conference Monday.

The government is looking to axe 10 of Brazil's 39 ministries by September as part of administrative reforms, he told reporters.

Analysts say the move is designed to show the government's commitment to austerity measures aimed at boosting an economy mired in recession.

Barbosa did not say how much the government hoped to save, but said more details would be provided at a later date.

Since President Dilma Rousseff's Workers' Party, the PT, took power in 2003 under former president Luiz Inacio Lula da Silva, the number of ministries has swelled significantly, from 26 to the current 39.

To compare, both the United States and Turkey currently have 15 ministry-level departments, whereas Germany has 14 and France 16.

Although cuts to public spending are considered vital for boosting confidence in the government among domestic and international markets, cutting the number of ministries could be politically difficult for Rousseff, as ministerial roles are used as bargaining chips to assuage uneasy political alliances.

It comes as speculation rises that the PT's biggest ally in government, the Brazilian Democratic Movement Party, or PMDB, could leave the coalition and strand the government without a majority.

Brazil's biggest party, the PMDB is expected to field a presidential candidate in 2018 for the first time since 1994, instead of aligning itself with a likely winner. Currently the vice president and both congressional leaders are members of the ideologically-disparate political movement.

Barbosa said all ministries would debate and "construct" the proposal by the end of September.

The planning minister said the government's administrative reforms would reduce the number of ministries, secretariats and ministerial organs, as well as aiming to cut commissioned roles and maintenance costs, and selling off government property no longer deemed necessary.

Rousseff's main opponents in the 2014 presidential election both said they would cut the number of ministries, whereas the president, who was narrowly re-elected ten months ago, said such a move would be tantamount of "immense technocratic blindness", the Folha de S.Paulo newspaper reports.