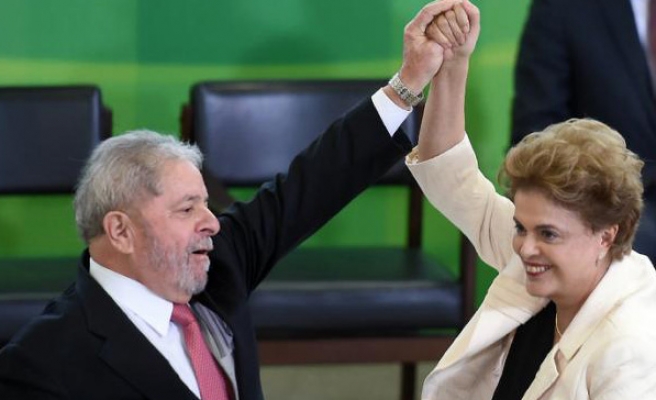 Supporters of Brazil’s left-wing government clashed briefly with opponents of President Dilma Rousseff and predecessor Luiz Inacio Lula da Silva outside the presidential palace on Thursday as the country slipped deeper into a political crisis.

Police used tear gas and stun grenades against some 5,000 anti-government protesters in the capital of Brasilia, while other demonstrators blocked the main avenue in Sao Paulo – Brazil’s largest city.

A federal judge issued an injunction suspending Lula's controversial appointment, citing the risk that his taking office would derail a judicial investigation into money-laundering and fraud.

Lula denies charges that he concealed ownership of a luxury seaside apartment as part of a vast kick-back scheme centred on state oil company Petrobras and contractors.

His supporters had urged Rousseff to give him a ministerial portfolio in order to avoid what they claim amounts to a politically motivated witch-hunt.

Under Brazilian law, senior government officials and members of congress enjoy immunity from federal and state prosecutors, and can only be tried by the Supreme Federal Tribunal, the country’s top court.

But Rousseff and Lula’s opponents accused the pair of political manoeuvring to avoid prosecution and undermine the judiciary.

Meanwhile, Brazil’s currency and stock market gained sharply on Thursday, as a second-consecutive day of protests calling for Rousseff’s dismissal boosted bets on her removal.

Brazil also saw record protests on Sunday, with many calling for Rousseff’s dismissal. The president has not been named in the Petrobras scandal so far, but stands accused of unlawful management of the country’s budget in 2014.

Rousseff has also denied any wrongdoing.

“I expect protests will pick up at high levels, since many see Lula’s appointment as a provocation after historically large protests on Sunday,” Joao Augusto de Castro Neves, a Brazil expert at the Eurasia group think tank, told FRANCE 24.

“Brazil is likely to have a very tense environment in the coming days and weeks,” he said.

An impeachment process was launched against her late last year, but it needs two-thirds support from Congress to pass. The corruption scandal has divided her governing coalition and moved her main partner, the PMDB party, closer to breaking with her government. Pressure from the street could encourage the party to sever ties completely.

Other protesters have openly called for a military coup, but experts said that scenario remained unlikely.

“I would say a military coup is out of the question,” Castro Neves said. “Brazil’s institutions are much more robust than other governments in the region, and the country has the legal channels to avoid such a scenario.”

If Congress were to pass Rousseff’s impeachment, the decision would then need to be approved by a simple majority in the upper-house Senate. Vice President Michel Temer, who is also the president of the PMDB party, would fill in for Rousseff if she is relieved of her duties.

In an unexpected twist to the political drama, the judge leading the Petrobras investigation on Wednesday night released tapped phone calls between Silva and prominent public figures.

The calls suggest attempts were made to aid the former leader in his judicial woes, according Judge Sergio Moro.

Moro justified the release by saying democracies “demand that the people know what their officials are doing, even when they attempt to act under the cover of shadow”.

The presidential palace called the release of the tapes an “affront to the rights and guarantees of the presidency" and said "all the appropriate judicial and administrative measures will be taken to repair the flagrant violation of the law and the constitution committed by the judge behind the leak”.