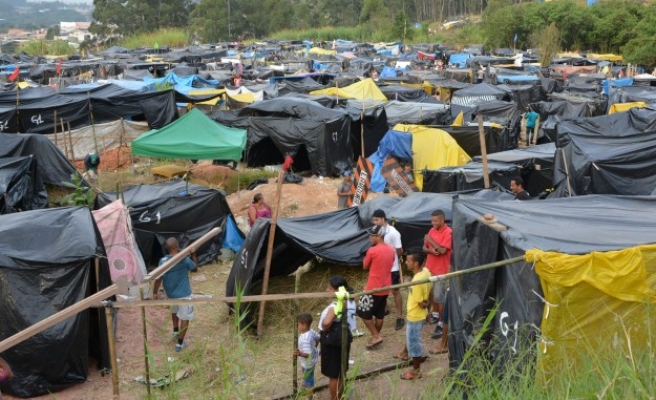 A judge in São Paulo Thursday night suspended an eviction order handed down on occupants of an area of private land in the vicinity of the city's World Cup stadium, local media reported.

A local justice court issued an eviction order Wednesday, after a claim from the landowner, and gave the families 48 hours to leave and clear the area at their own expense.

But the Homeless Workers' Movement said it would launch an 'organized resistance' against any forced eviction by police and the organization's legal team formally appealed the court's decision.

President Dilma Rousseff met a movement representative, Guilherme Boulas, at the stadium Thursday, after a day of coordinated protests by the organization and the Landless Workers' Movement.

Late in the day the eviction order was suspended in response to the Homeless Workers' Movement’s appeal. The case will be examined again at a hearing on May 23.

The Anadolu Agency visited the site Tuesday and was told by a movement representative that 2,500 families were currently occupying the site though the area could hold as many as 4,000. New residents are planning long-term facilities, including toilets, market stalls and a place to hold religious services.

'Priced out of home'

The families are largely local residents who say they have been priced out of their homes by rents that, in some cases, have trebled in value. They blame speculation due to the World Cup stadium.

“We're fighting to get ourselves a house to live in,” Ademilson da Concessão dos Santos, 24, one of the site's occupants, told AA. “It doesn't matter if it's here or somewhere else. Rent is just too expensive around here.”

The camp is by no means the only illegally occupied site in the city of 12 million inhabitants. Officials at São Paulo City Hall were quoted by the G1 news portal as saying that the number of squatter settlements has increased rapidly in the last three months, to some 90 sites.

São Paulo kicks off this year's Brazil-hosted World Cup on June 12 with a clash between Brazil and Croatia at the Arena São Paulo stadium.