Rio de Janeiro is receiving billions of dollars to make improvements to the city in time for its hosting of the World Cup and the Olympics. Those with property are the big winners, with the price of real estate on the city’s dazzling South Zone beach hotspots skyrocketing. But, this is in stark contrast with twenty percent of the city’s population, which lives in the city’s widespread shantytowns called "favelas". 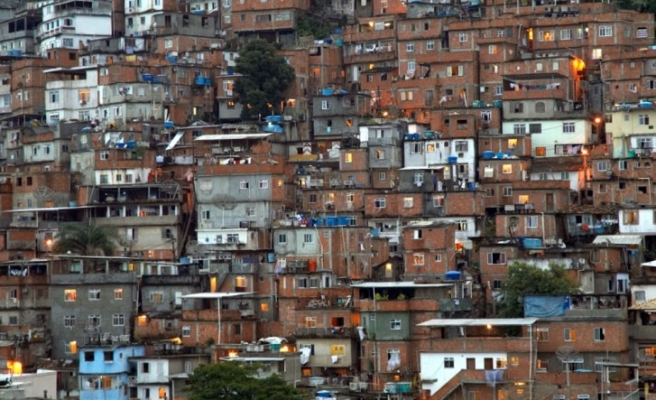 The Cidade Maravilhosa, or "Marvelous City" as Rio is often called, has always been a city of enormous contrasts in terms of its population. Since the days when royalty and slaves rubbed shoulders, to now, when those from the favelas – Rio’s shantytowns – head to the city’s glamorous beaches to seek the upper classes and foreign tourists in overpriced hotels, bars and restaurants to scrape together enough coin to feed their families.

In Rio, a street is sometimes all that separates the most expensive real estate in Latin America from slums home to the most deprived communities on the continent.

Since the mid-19th Century, the city’s favelas grew massively, many of them into the steep slopes of Rio’s countless hills.

Brazil’s last census revealed that the country now has 6,329 favelas nationwide, and that they are home to 11.4 million Brazilians – six percent of the population.

To this day, the slums – which are home to a fifth of Rio’s population alone – are seen by many as lawless, no-go areas and havens for traffickers smuggling mainly drugs and arms. Until not so long ago, even the police feared to enter these favelas, so fearsome the armed gangs that ruled the roost.

In 2008, less than a year after being confirmed as host for the 2014 World Cup, the authorities in Rio began  "pacifying” these vast swathes of the city – meaning police forces and tactical squads went in, rooted out the gangs and took back these areas, very much by force – with many killed in the process, including many innocent favela residents.

One of the first to undergo this process was the favelas immortalized in the famous Brazilian movie "City of God", which was based on real events from Rio’s Cidade de Deus favela. It was only the second favela to receive a Police Pacification Unit, known locally by its Portuguese acronym – UPP.

Once pacified, the idea was to reintegrate these areas with the city, introduce “civilization” through newly-installed public services, and break down the long-established dividing lines that kept the favela populations under-developed and with little chance of improvement.

The poorest region of Rio

In 2011, police went into one of the biggest and most complicated areas they had had to pacify to date – a great swathe of favelas in Rio’s North Zone known as the Complexo do Alemão, long considered one of the most violent parts of Rio, which is also blighted by malnutrition, disease and, as a result, high rates of infant mortality.

As the areas were cleared of gangs, a major breakthrough for the area’s outward integration came in the guise of a cable car uniting the hilltops of a string of favelas, following by the inauguration of a series of UPPs.

Two years after that initial battle between the area’s ruling gangs and police, the cable car is well used (it’s free for residents) and has allowed tourism to come to the area for the first time. Those whose houses were destroyed during its construction have been moved into low-cost housing.

Sailing high above the rooftops, the view from pods allows passengers to look directly into the lives of those living in the favelas below: children flying kites, sellers putting out their goods, old men playing cards in the street, teenagers riding two to a bike, and women hanging out close to dry in the fierce Rio sunshine.

However, leaving the cable car and entering the winding pathways that lead through Itareré, the smell of human waste, stagnant water and weeks of piled-up refuse hits you – wave after wave.

The people are welcoming, but many bear the signs that only basic health and sanitation services are available.

Rio guide Fábio Mendonça highlights parts of the favela that have seen steps taken to bring in public services, security and a sense of urban “normality” into the area for the first time.

Community centres have sprung up to give children activities for when they are not in school, which typically only give classes for three or four hours a day. Children are allowed to draw and paint, as well as being engaged in more dynamic activities – samba, circus tricks, dance and capoeira.

Rubber bullets for some, real ones for others

The favelas are one area that has seen improvements in Brazil – with lives being changed, albeit slowly for some, and new facilities are being brought in.

High streets banks have shown their confidence in the areas now by moving in and opening their doors. Things are tangibly better, Mendonça explains, but there remains much to be done – particularly with schools, and although there is now a police presence in the favelas, residents are still highly suspicious of their new guardians.

And with just cause, it would seem. Last week, an operation by military police in the Maré favela left at least nine people dead.

Human rights activists say tens of thousands of people have been killed by police in Rio, who they say often act with impunity and in cahoots with the criminals. One NGO in the Maré favela – Redes da Maré – questioned why rubber bullets had been used on protesters in upmarket areas of Rio, and real ones in the favelas.

The incident happened at the height of the recent mass protests. Protesters had already taken up the favela residents’ cause after a series of enforced evictions, but soon turned their attention to the case in Maré, accusing police of opening fire on innocent people – an accusation leveled time and time again.

Brazil’s recent protests, although predominantly attended by the country’s “middle class”, have sought to highlight the major social injustices ongoing in Latin America’s biggest country and most successful economy, and the plight of many of the country’s poorest people.

Although years of work, particularly by the leftist Workers’ Party of former president Luiz Inácio Lula da Silva and his protégé, the incumbent president Dilma Rousseff, have given rise to social programs that have lifted 35-40 million Brazilians out of extreme poverty, the 2011 census showed 16.2 million Brazilians remain officially below the breadline, and recent World Bank data showed 10.8 percent of the country’s population live on less than US$2 a day.

Headlines about Brazil’s “booming middle class” also need a crucial footnote, as this percentile of the population is not the same as might be understood in North America or Western Europe.

The term is used in a broad sense, and its lowest rung, the so-called “Class C”, earns just US$790 a month – enough to pay a modest rent, just about feed the family and perhaps make a payment on a TV or domestic appliance bought in ten installments - purchases which the government tout as signs of the country’s economic emergence.

One major difference between the wider middle class and the “Class C” is that this lower middle class cannot afford to bypass the country’s poor public services and pay for private education and health services.

Despite Brazil’s recent economic success – driven by booming commodity exports and consumer spending – and successive governments’ bold social welfare programs, a cooling-off of the economy has left many people dissatisfied as, while incomes improved, public services did not.

At the heart of the problem, many feel, is the political apparatus – a multitude of ministries (39 at the last count, compared to the fifteen used to run the United States) and a long list of self-serving and corrupt politicians coupled together has meant that not enough of the R$611 billion (US$274 billion) spent on running the country – excluding investments – has actually reached to its final destination, instead going on administration and entitlements.

The result is that Brazil invests far less directly into its public services than any other major economy.

When taking into account the US$25 billion that Brazil is spending on hosting the World Cup and the Olympics, justified by promises of improvements to public services, infrastructure and urban mobility, the reasons why so many people have taken to the streets in the past month becomes all too clear.

Instead of those brought out of poverty in the football-mad country heading to their nearest Confederations Cup stadium to watch top-flight matches, many instead decided to voice their dismay on the streets.

Protesters have voiced their opposition to Brazil’s hosting of the World Cup and Olympics because, despite promises of a long-lasting legacy that would improve millions of lives, only a privileged few are benefiting from the events – including corrupt politicians.

Rio’s hotels, eyeing an opportunity with the string of major events coming to the city, have profited by bumping up their prices significantly, making them the most expensive in the world in 2012.

Property prices have also expanded dramatically, given growing demand and limited space in the most sought-after areas. The latest reports show that the average square meter of real estate in Rio costs US$4,100 – five years ago, it was under US$2,000.

However, the city’s South Zone beach favourites of Copacabana, Ipanema and Leblon can command far higher prices – indeed the highest in the whole of Latin America. Leblon property prices have shot up to US$11,000 per square meter.

The result is that even people rich enough in the past to live in such prime locations are having to move out and find cheaper places to live.