Brazil's 7-1 trouncing by Germany in Tuesday's semi-finals changed the nation's mood ahead of what is shaping up to be the toughest race since her leftist Workers' Party won power in 2002. 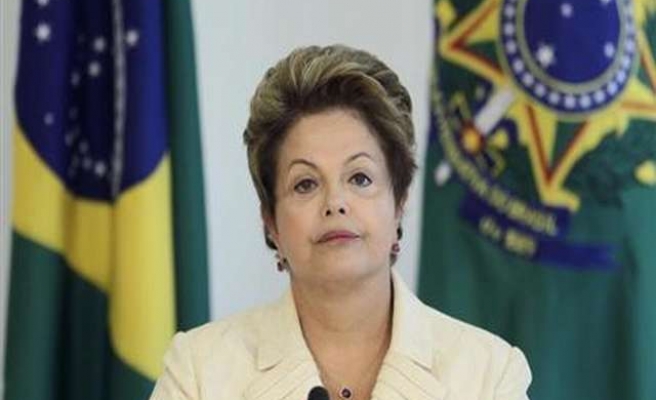 Brazil's humiliating defeat in the World Cup will have no impact on the elections in October, President Dilma Rousseff predicted on Friday as she prepares to hit the campaign trail to seek a second term.

Despite criticism of her government's preparations for hosting the soccer tournament, Rousseff's poll numbers crept higher recently as Brazilians got caught up in the excitement of the month-long World Cup.

But Brazil's 7-1 trouncing by Germany in Tuesday's semi-finals changed the nation's mood ahead of what is shaping up to be the toughest race since her leftist Workers' Party won power in 2002.

"There is a tradition in Brazil that you don't mix soccer with politics," Rousseff told a group of foreign reporters at the presidential residence in Brasilia. "What would have been serious was losing the World Cup off the pitch."

Despite delays in the delivery of stadiums, the World Cup in Brazil has been widely praised for its riveting soccer action on the field and generally good logistics. Rousseff said none of the predictions of disastrous venues, chaotic airports, power blackouts and even a dengue fever outbreak had come true.

Polls show that Rousseff remains the favorite heading into the Oct. 5 vote, though her challengers have narrowed the gap in recent months. The election is likely to be decided in a second-round runoff later that month against Aecio Neves of the pro-business Brazilian Social Democracy Party.

Rousseff plans to campaign on the improvements in social conditions in Brazil since her Worker's Party took power and lifted tens of millions of Brazilians from poverty and into the consumer market economy.

Such a reduction in social differences has not been seen since the return to democracy in post-Franco Spain, she said, in reference to dictator Francisco Franco who ruled the European country from 1939 to 1975.

The rapid expansion in the number of consumers raised expectations among Brazil's middle class that is demanding better quality services in education, health and transport, Rousseff said. Those grievances helped spark a wave of massive protests last year by Brazilians angered by the $11 billion cost of the World Cup.

Rousseff said improving productivity and infrastructure are priorities for Brazil to make the country more competitive in the current context of slow economic growth worldwide.

Brazil will enter a partnership with China to build railways during next week's visit by Chinese President Xi Jinping, she said.

Asked if she would change her economic polices if re-elected, Rousseff defended her intervention in the electricity market last year in a bid to cut power rates paid by consumers, a move that caused shares in electricity companies to plummet.