A legal request has been filed to impeach Brazilian President Dilma Rousseff for obstructing justice and fiscal accounting tricks, the second one against the leader politically embattled by her own government. 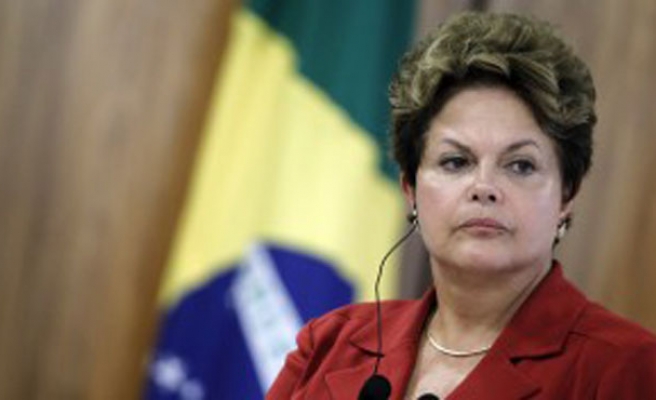 Brazil's largest political party looks set to quit the government of leftist President Dilma Rousseff on Tuesday, in a move that would trigger the collapse of the coalition and push her closer to impeachment.

The country's largest party, the PMDB, is set to decide Tuesday whether to quit the leftist leader's government, but top figures indicated the break was all but final.

"It will be an exit meeting, a goodbye to the government. We calculate we have a vote of more than 80 percent in favor of quitting," said PMDB lawmaker Osmar Terra.

"There has been a series of dominoes falling, and it cannot be turned back. The government keeps trying, and offers jobs, but nobody believes it any more," he added.

Rousseff, who is fighting recession, scandal, protests and the mounting push to impeach her, met PMDB ministers Monday to try to convince them to stay.

But a spokesman for party leader Michel Temer -- who is also Rousseff's vice president and the man who will take power if she is impeached -- told AFP the only outstanding issue was a proposed deadline for cabinet members to leave the PMDB if they want to keep their jobs.

"They would have until April 12, and then any PMDB members who have a job in the administration would quit," he said.

Late Monday, a first PMDB minister did resign -- it was Minister of Tourism Henrique Alves. Time, he said, "has run out" on the president.

The PMDB, a massive centrist party, has always been an awkward partner for Rousseff's left-wing Workers' Party (PT), which needs its votes but has little in common with it ideologically.

The PMDB currently has seven ministers and 69 of the 513 members of the lower house of Congress, where Rousseff is struggling to come up with the one-third vote she needs to block impeachment.

Lawmakers from both the center-right Progressive Party (PP), which has 49 deputies, and the center-left Social Democratic Party (PSD), which has 32, said their parties would meet this week on a possible split.

The impeachment case, currently before a congressional committee tasked with making a recommendation to the full lower house, is built on accusations that Rousseff manipulated the government's accounts to boost public spending and hide the severity of the recession.

The Brazilian bar association filed a new impeachment request Monday, seeking to expand the case to include accusations of obstructing justice in the investigation into a multi-billion-dollar corruption scandal at state oil company Petrobras.

Angry protests erupted at Congress as lawyers filed the request.

"Putschists!" shouted Rousseff supporters, which the lawyers answered by singing the national anthem, before security guards broke up the melee.

Temer, 75, has conspicuously not come to Rousseff's defense as the impeachment storm swirls.

Instead, he met last Monday with opposition leader Aecio Neves, who narrowly lost the 2014 election to Rousseff, to discuss the future of the nation.

Since the beginning of March, millions of Brazilians -- especially whites, the wealthier and better-educated -- have marched to demand Rousseff's ouster.

Her backers have held their own demonstrations, with much smaller crowds. A new rally "in defense of democracy" has been called for Thursday.