Brazil's Rousseff gains on Silva a week from election

The Datafolha survey said Rousseff has 47 percent voter support compared with 43 percent for Silva in a simulation of the expected second-round vote. 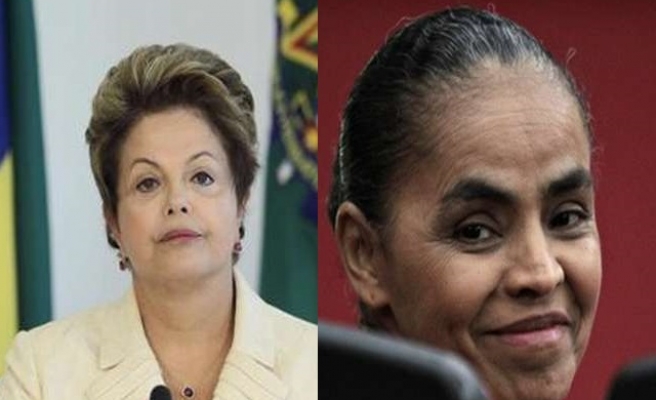 The Datafolha survey said Rousseff has 47 percent voter support compared with 43 percent for Silva in a simulation of the expected second-round vote.

The four-point gap between them is a statistical tie because it lies within the margin of error of the poll released on the TV Folha Internet news service.

Silva, a popular environmentalist, surged in the polls after her late entry into the race last month, quickly gaining a 10-percentage-point lead over Rousseff for the likely runoff.

But Rousseff fought back questioning Silva's policies and ability to give Brazil stable government. The attacks whittled Silva's lead to two points in the previous Datafolha poll last week.

Rousseff's also gained in first round intentions, rising to 40 percent from 37 percent a week earlier increasing her chances she could win outright without a second round. Silva's first-round support fell to 27 percent from 30 percent.

If no candidate wins a majority in the first round, the two top candidates face off for a second vote three weeks later. A second-round election, though, offers Silva a more even fight.

During the runoff, the candidates get equal time.

A second, smaller and less closely followed poll released late Friday also shows the candidates neck and neck but with Rousseff gaining. A second-round survey by the Sensus polling agency has Rousseff's support rising to 40.5 percent from 32.8 percent in the last poll earlier this month and Silva's slipping to 40.4 percent from 47.6 percent.

Sensus' first-round survey has Rousseff with 35.1 percent, Silva with 25 percent and Neves at 20.7 percent.

Datafolha said Rousseff gained 6 percentage points and Silva lost 9 points in the poor Northeast of Brazil, a bastion of support for the ruling Worker's Party since it first took the presidency in 2002 under Luiz Inacio Lula da Silva.

The new poll confirms the result of other recent surveys showing that Rousseff has regained momentum in a race that still looks too close to call.

Rousseff has used her huge advantage in fundraising and TV time to undermine support for Silva by portraying her pro-market policies as favoring the rich and hurting the poor.

The poll numbers could change in the second-round campaign when the two candidates will have equal TV time and Silva is expected to gain the bulk of Neves' supporters.

Silva's popularity is solidly based in the young urban middle class who welcome her promise to break with traditional parties and clean up Brazil's notoriously corrupt politics.

Silva promises to jumpstart Brazil's stagnant economy, while Rousseff vows to extend social programs that have lifted millions of Brazilians out of poverty and reduced inequality in Latin America's largest nation.