Britain threatens to attack Ecuador embassy to get Assange

The Ecuadorean government said such an action would be considered a "hostile and intolerable act" as well as a violation of its sovereignty. 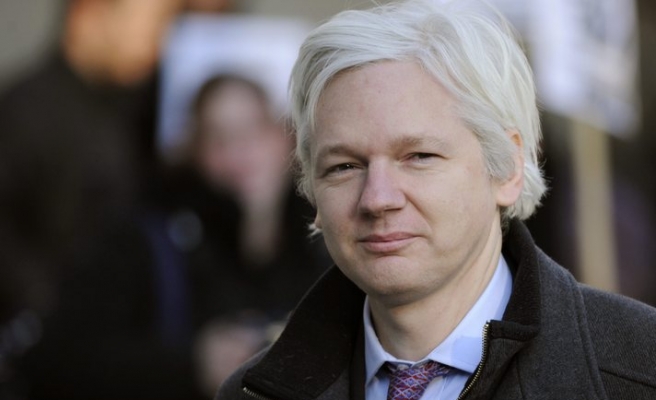 The diplomatic standoff over WikiLeaks founder Julian Assange escalated on Wednesday after Britain threatened to raid Ecuador's embassy in London if Quito did not hand over Assange, who has been taking refuge there for two months.

The Ecuadorean government said such an action would be considered a "hostile and intolerable act" as well as a violation of its sovereignty.

"Under British law we can give them a week's notice before entering the premises and the embassywill no longer have diplomatic protection," a Foreign Office spokesman said.

"But that decision has not yet been taken. We are not going to do this overnight. We want to stress that we want a diplomatically agreeable solution."

Quito bristled at the threat and said it would announce its decision on Assange's asylum request on Thursday at 7 a.m. (1200 GMT).

"We want to be very clear, we're not a British colony. The colonial times are over," Ecuadorean Foreign Minister Ricardo Patino said in an angry statement after a meeting with President Rafael Correa.

"The move announced in the official British statement, if it happens, would be interpreted by Ecuador as an unfriendly, hostile and intolerable act, as well as an attack on our sovereignty, which would force usto respond in the strongest diplomatic way," Patino told reporters.

Ecuador, whose government is part of a left-leaning bloc of nations in South America, called for meetings of regional foreign ministers and the hemispheric Organization of American States to rally support in its complaint against Britain.

"We are deeply shocked by British government's threats against the sovereignty of the EcuadoreanEmbassy and their suggestion that they may forcibly enter the embassy," the mission said on its website.

"This is a clear breach of international law and the protocols set out in the Vienna Convention."

The embassy, near London's famed Harrods department store, was under tight surveillance, with three police officers manning the entrance and several others patrolling around the red-brick building.

A group of Assange supporters who responded to a rallying call by WikiLeaks on Twitter gathered outside to demand Assange's freedom and streamed the scene live on the Internet.

"We have been here day in day out as a vigil to make sure there is at least a witness to all of this," said Anthony, one of the supporters.

WikiLeaks earlier tweeted saying, "If police storms, they will do so in early hours of the morning. Please stay, & those who can, go to the embassy and #ProtectAssange".

The Australian former hacker has been in the embassy for eight weeks since losing a legal battle toavoid extradition to Sweden, where he has been accused of rape and sexual assault by two WikiLeaks supporters.

"The UK has a legal obligation to extradite Mr Assange to Sweden to face questioning over allegations of sexual offences and we remain determined to fulfill this obligation," a Foreign Office spokesman said earlier.

Swedish prosecutors have not yet charged Assange, but they have moved forward with their investigations and they believe they have a case to take to trial.

Assange fears Sweden could send him on to the United States, where he believes authorities want topunish him for publishing thousands of secret U.S. diplomatic cables on WikiLeaks in 2010 in a major embarrassment for Washington.

Even if he were granted asylum, Assange has little chance of leaving the Ecuadorean embassy in London without being arrested.

But lawyers and diplomats see those scenarios as practically unworkable.

The Ecuadorean government has said it wants to avoid Assange's extradition to Sweden, but approval of asylum would offer no legal protection in Britain where police will arrest him once they get a chance.

Ecuador's leader Correa is a self-declared enemy of "corrupt" media and U.S. "imperialism", and apparently hit it off with Assange during a TV interview the Australian did with him in May.

Correa joked then with Assange that he had joined "the club of the persecuted".