Santiago Ilídio Andrade, who was hit by a firework during bus price hike protest was declared brain dead. 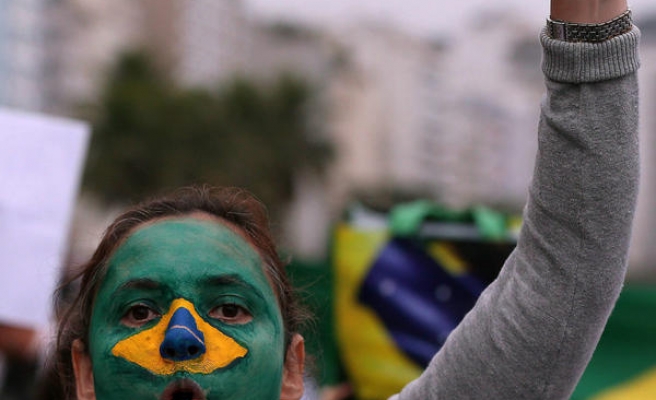 A cameraman hit by a rocket-style firework while covering a violent protest in Brazil's Rio de Janeiro was declared brain dead Monday by doctors treating him.

Footage from the scene shows the moment when the cameraman was struck on the head by the firework, leaving him with severe damage to his skull and part of an ear missing.

He was then rushed to a hospital and underwent a number of operations before being placed into a coma.

On Monday, Rio's Municipal Health Secretariat confirmed that the neurosurgeons treating Andrade had said he was now brain dead.

Speaking exclusively to Brazil's TV Globo, Andrade's wife, Arlita, said “They've destroyed a family; a family which was united,” and criticized those responsible for their “lack in love."

Mr. Andrade had won two awards during the ten years he worked for TV Bandeirantes.

Folha de S.Paulo daily newspaper reported that he had been on a course for journalism in conflict zones, but other media say he had only started covering protests during last year's wave of anti-government unrest.

Footage also appears to show Andrade not wearing a helmet or other protective clothing.

Military police and tactical squads said they had not used any such fireworks, and experts analysing available footage later concluded the rocket-style pyrotechnic was launched by protesters.

After footage of the incident was broadcast, one of the protesters involved - tattoo artist Fabio Raposo, 22 - presented himself at a police station to say he had found the firework on the ground, and passed it to an unknown protester who had launched it.

Raposo was later arrested, and police said he would face a charge of attempted homicide.

Police official Jose Pedro Costa told a news conference that his force's main aim was “to identify the person responsible for setting off the device which hit Santiago.”

GloboNews has since reported that Raposo's lawyer has identified the man who set off the firework, and that he would pass the information on to investigating officers.

The lawyer said Raposo had managed to gain access to the information through an intermediary and emphasised that the two were not known to each other.

Hundreds of people took part in last Thursday's protest - the latest in a series of anti-government protests which began last June.

This time the protesters' grievances were being levelled at the local authorities' decision to increase the price of bus fares in the city by nine percent to R$3.00 (about US$1.25).

The demonstration had started peaceful at around 5pm last Thursday, but after about an hour – as protesters arrived at the city's Central do Brasil transport hub – police began firing tear gas to disperse them.

A number of people were injured as rush hour commuters became caught up in the violence.

The protests appear to be a continuation of last year's movement of mass countrywide demonstrations, aimed mainly against government corruption, police brutality, poor public services and the country's perceived excessive spending on this year's FIFA World Cup and the 2016 Olympics.

At one point over a million people took to the streets to protest a long list of various grievances.

Twelve cities across Brazil are set to host the World Cup this June and July. São Paulo is set to host the opening game on 12 June, whereas Rio will be home to the tournament final on July 13.

Officials say any public money that has needed to be spent to get tournament venues and associated infrastructure ready on time will be paid back and that Brazil's hosting of both the World Cup and the Olympics will leave a legacy of social and economic benefits for the country.