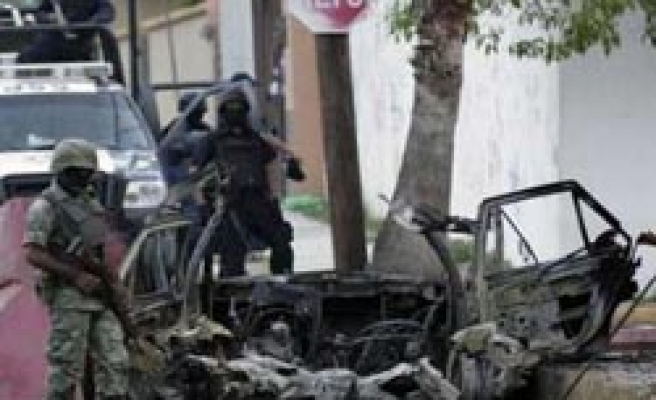 Two car bombs exploded in northern Mexico early on Friday, the latest attack in an area where several days earlier marines found the bodies of 72 people gunned down in the country's escalating drug war.

The blasts, the second and third modest bombs planted in a vehicle this month in Ciudad Victoria, the capital of the northern Gulf state of Tamaulipas, and the fourth in Mexico since late July, caused no casualties but damaged buildings.

The explosions came the same day officials discovered the body of a police officer investigating the massacre of dozens of migrants in another attack by suspected drug hitmen.

"I'm told of the explosion of two car bombs here in the state, one in the offices of local traffic police and the other in the installations of Televisa," Tamaulipas Governor Eugenio Hernandez said, referring to Mexico's top broadcaster.

One of the blasts, apparently part of a campaign to intimidate the media, left little more than the car's engine and front chassis on a street near Televisa's studios in Ciudad Victoria, 220 miles (350 kms) south of the Texas border.

While Televisa gave no details of the blast and it was unclear what sort of explosives were used, car bombs are a new weapon in Mexico's drug war. The vehicle-borne devices detonated so far appear to be relatively unsophisticated and have not caused widespread destruction.

Four people were killed in July in the violent border city of Ciudad Juarez by a bomb planted in a car, the first such attack since President Felipe Calderon took office.

More than 28,000 people have died in drug violence since Calderon launched his war on drugs in late 2006.

As violence intensified, the U.S. government told staff at its consulate in Monterrey to remove their children from the northern city, which is a business hub with close U.S. ties.

The decision follows an apparent kidnap attempt outside an elite private school attended by children of consulate staff.

Fourteen drug-related slayings were reported on Friday in different locations in the Pacific beach resort of Acapulco, popular with U.S. tourists but also a key transit point for narcotics. The bodies of several of the bound and blindfolded victims bore messages threatening rival cartels.

"The paradox is that in other areas there can be advances ... in improving the economy, in social policy, but while this matter keeps weighing heavily on the daily life of ordinary people the country will not move forward as much as it should with its enormous potential," Calderon said in Mexico City.

The explosion at Televisa was at least the fourth apparent attack on its studios in northern Mexico since last year, when drug hitmen threw a grenade at its studios in Monterry, Mexico's business capital.

Grenades were also thrown at Televisa in Monterrey and Matamoros across from Brownsville, Texas, earlier this month, police said. No one was hurt in the attacks.

"They want to sow terror in society and they are going for symbols. Televisa has a big presence at a local level in this region," said Alberto Islas, an independent security analyst with crisis management firm Risk Evaluation.

Tamaulipas state has become one of Mexico's bloodiest drug flashpoints since the start of the year as rival hitmen from the Gulf cartel and its former armed wing, the Zetas, fight over smuggling routes into the United States.