Cars were set ablaze and police presence was reinforced in a Rio de Janeiro shantytown after an elderly woman is killed in crossfire between police and criminals. World Cup kicks off in less than seven weeks. 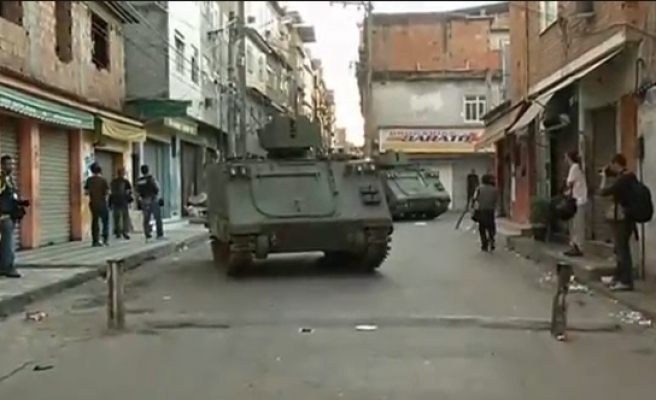 At least three cars, including a police vehicle, were set ablaze in the Rio de Janeiro favela (shantytown) area of Complexo do Alemão Monday in an apparent protest against the fatal shooting of an elderly woman, local media report.

Arlinda Bezerra de Assis, 72, died after being shot in the stomach during a gun battle between police and criminals in the favela on Sunday night amid ongoing police actions ahead of the World Cup kickoff in less than seven weeks.

The cars were set alight near the main coordination center of the city's Police Pacification Units, permanent police stations set up in the middle of “pacified” favelas. The coordination center is located in the Complexo do Alemão, a large swathe of favelas which sprawls across a number of hilltops in the north of the city.

The police units, known as UPPs after their Portuguese acronym, have been the target of increased attacks by criminals in recent weeks, particularly after the occupation of the nearby Maré sprawl of slums in early April.

The UPP coordination center said in a statement that its officers had been patrolling the area Sunday when they were attacked by armed drug traffickers, UOL news site reported.

Both Maré and the Complexo do Alemão complexes are located close to the city's main international airport and major central thoroughfares and public transport transit links, infrastructure critical to the World Cup.

The Maré favela was occupied by federal troops at the beginning of April in a bid to quell violence in the strategically-located shantytown ahead of the soccer tournament, for which Rio will host seven games, including the final on July 13.

The fatally-wounded woman, known locally as Dona Dalva, was hit while shielding her great-nephew from the crossfire, according to local residents quoted by the G1 news portal.

The boy's mother made an emotional plea for the government to provide greater help to the community.

“We don't want money; we just want some help,” Marinalva Bezerra was quoted as saying.

“My son is in a state of shock and needs psychological help,” she said, adding that she had yet to receive any word of apology from the state.

It was not clear who fired the shot that killed Bezerra. An investigation is expected to take place.

A protest by residents broke out on Sunday night after news spread of Bezerra's death and police dispersed crowds with rubber bullets. Later that day the local UPP station was attacked by armed criminals, local media reported. Police reinforcements remained in the area on Monday.

The Complexo do Alemão was one of Rio's most notorious favelas before its pacification, but has recently witnessed a return in violence.

Fábio Mendonça, a Rio favela tour guide, recently told the Anadolu Agency his company has had to stop offering visits to the Alemão area: “It has become too dangerous due to run-ins between criminal gangs and police. Now we only run tours to calmer favelas.”

Some experts have now begun questioning whether the pacification program, which started in 2008, has lost its effectiveness, with recent reports of attempts by drugs gang to reoccupy pacified favelas.

A study by the Federal University of Rio de Janeiro (UFRJ) published Monday in Folha de S.Paulo newspaper said the program had succeeded in reducing violence crime in the favelas by 64 percent in six years, and 29 percent in neighboring communities.

However, the study also showed that drug trafficking, the main criminal activity associated with the poor communities, has continued unabated.

Rio's favelas account for around 22 percent of the city's population.