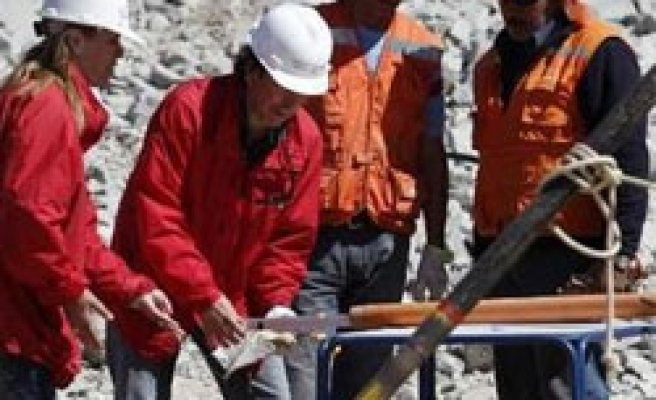 Resigned to watching his child's imminent birth on video, trapped miner Ariel Ticona waited as rescuers started drilling an escape shaft on Monday to save him and 32 companions 25 days after a cave-in.

The bid to rescue the miners, stuck in a hot and humid tunnel 2,300 feet (700 meters) underground, is one of the world's most challenging and could take between two and four months. The government has turned to NASA and submarine experts for help.

Striving to keep the men physically and mentally fit for the wait ahead, doctors sent flu vaccinations and nicotine gum for smokers in withdrawal down a tiny shaft the size of a grapefruit, the men's umbilical cord to the outside world.

Rescuers started drilling a 2-foot (66-cm) diameter shaft on Monday evening that will be used to evacuate the miners one at a time in a cage attached to a pulley.

Engineers in the world's No.1 copper producer are also looking into other options to speed up the rescue, including digging a second escape duct that could take about 60 days.

The trapped miners talked to their relatives on Sunday for the first time since they were found alive over a week ago.

Ticona asked his relatives during a one-minute intercom call to tape the birth of his third child, due in mid-September, and send the video down into the bowels of the earth for him to watch.

"He told his wife to take care before the delivery," his father Hector told Reuters. "He doesn't want to appear on the videos to save her the grief, but wants to see his new child."

Fellow miner Esteban Rojas has vowed to marry his wife in church, 25 years after their civil ceremony.

Dramatic footage taken by the men on a video camera sent down the narrow chute showed them bearded, their torsos bare to cope with the heat, some visibly thin.

Pope Benedict on Sunday prayed for a safe rescue and urged the miners to remain calm.

Longing for daily routine, the men -- who range from a teen, first-time miner to an ex-soccer star to a Bolivian migrant -- have organized themselves in the bowels of the mountain.

The images showed the men have designated areas for sleep and card games while freeing space to keep personal items like toothpaste and deodorants.

Rescuers have sent the miners miniature projectors so they can watch video clips of soccer greats Pele and Maradona, as well as portable video games and MP3 players to help miners bear the boredom.

Doctors say the miners are in good health, but have told them to move to a new location deeper in the tunnel to try to reduce exposure to humidity that could cause disease or fungus.

The accident at the San Jose gold and copper mine has put the spotlight on mine safety in Chile, although output is not expected to suffer from planned regulation reforms in light of the accident.